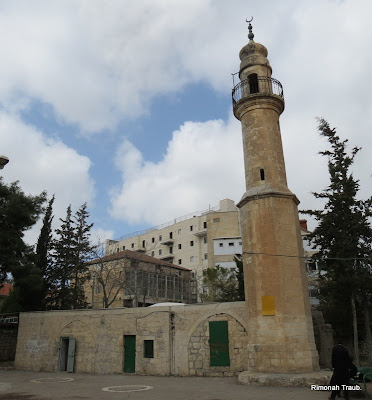 By Vardah Littman
I am sure you have passed here umpteen times, yet I can almost guarantee you did not realize the significance of the place. I myself only found out about it a few weeks ago
If you turn into Rechov Yeshayahu from Rechov Hanevi’im and then right into the first little lane - Rechov Prag and then go up a ramp on the left, you will find yourself in a tiny park with playground facilities of shoots and slides also called Turbat Kameria.The word turbat means burial place of respected people in Arabic. The typical turbat is a square shaped structure with a domed roof.

Dominating this small area is a Moslem tower of prayer – Nebi Akasha. Behind some trees is found another Moslem building with a dome now used by the  municipality to store gardening supplies. The mosque was apparently built under the Ayyubid dynasty in the 12th century with additions made during the Mameluk period in the 13th century.The other structure, the turbat, where members of a prominent Moslem family who were killed battling Crusaders was built during the Mameluk period, making it about seven hundred years old.

Moslem tradition says that the mosque was founded on the burial site of combatants in Saladin’s army, though a different tradition of theirs designates the site as the place where Akasha, one of the disciples and friends of Muhammad, was buried. 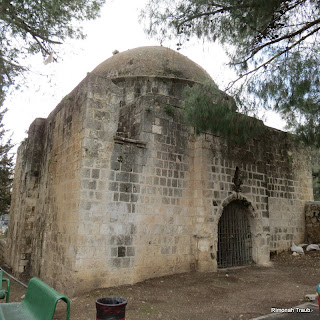 But there’s an alternative explanation for this Moslem site. The Governor of Jerusalem during the British Mandate, Ronald Storrs (he was the one who passed the law that Jerusalem buildings should have a stone outer covering), was led to name nearby Rechov Hanevi’im  so because of a  slightly mixed up Moslem tradition that claims Moses, the Nazarin, and Muhammad are buried here at Nebi Akasha.

Of significance to us is the fact that when olei regel approached Yerushalayim, this was the first high spot from which they could view Har Habayis
When the English painter Holman Hunt came to  in the mid 1850s, Rechov Hanevi’im was empty. He was in search of accurate topographical and ethnographically material for his religious artworks and was enthralled with the view from the mound of Nebi Akasha.  From here, Hunt had a clear view up to the Walls of the .
This place is what the mekubalim call pitcha dekarta (Opening of the City). Due to kabalistic calculations, they claim that Moshiach will arrive from here. Mekubalim among the students of the Vilna Gaon used to hold prayer sessions here called “Tsafnat Panayach” and “Od Yosef Chai”, in order to make the Geulah come sooner.

At first, they rented the plot from the Arab who owned it and set up a tent. Then about 120 years ago, the inhabitants of  were elated when they managed to purchase the area. A very large tent was pitched called “Ohel Mosiach ben Yosef.”  Especially on Layl Shabbos they held prayers in this tent to mekarev the Geulah. This tent stood for seventy years.

During the World War II, mekubalim came to daven here that Eretz Yisrael be spared from the army of the German General Rommel. There is also a legend that the mekubal HaRav Yitzchak Kaduri prayed here during the Gulf War in 1991.

Exiting the park form the other side will find us on Rechov Straus opposite Bazaar Straus.
Posted by Eretz Yisroel in the Lens at 8:32 PM