The Suspension Bridge Over Nachal Habesor© 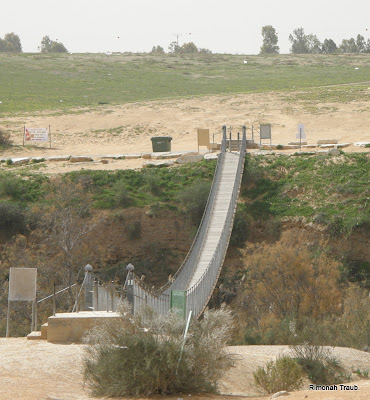 Although there are more direct and faster routes toBe’er Sheva and the south, the Basor is one of the beauties of the  that would justify a diversion to this route.

The Derech Habesor () is  (about ) of scenic, unsettled road, which will take you back to the times of the Avos. The track, which can be walked or done by car or bicycle, follows Nachal Habesor (Basor Stream). It has many viewing areas, shady spots, ancient wells, historical sites, and a hanging bridge for pedestrians on its path. The trail stretches from  in the north to Tze’elim in the south and is relatively flat. At the entrance there is a viewing tower, allowing a good view of the area. From the banks of the Basor Stream, it is possible to spot turtles and little black ducks swimming in it. The pleasant walk alongside the stream highlights the contrast between desert and water. For much of the way, there are orchards on one side and pure  scenery on the other. The green along the watercourse in this desert area is a real treat for the eye (and the camera), as the area is typified by rich and unusual flora.

Along the stream is thick and varied vegetation, and in February the area is carpeted with an amazing display of anemones. The trees and bushes along the banks include pistachio, olive,  peppers, tipuana, several varieties of acacia and Retem (Rotem — White broom). Rabi Meir (Bereishis Rabbah 53) says that Hagar thrust Yishmael under a Retem bush. Many generations later, when Eliyahu Hanavi fled into the desert from the wrath of Izevel, he lay under a solitary Retem (Melachim I, 19: 3-8). The White broom is at its most beautiful in Shevat/Adar when its tiny buds explode into a myriad of white, butterfly-shaped flowers that exude a marvellous perfume.

This is a paradise for birds, and hundreds of colourful species use the river area as a migratory stopover site. The spur-winged plover is a permanent dweller. This bird wears formal attire — a black cap, white cheeks, with a black stripe running down the centre of its gray/beige body — and refuses to be ignored. Its horrific screech scares off any other bird that comes too close to it. Many magnificent birds of prey wheel around in the sky above. 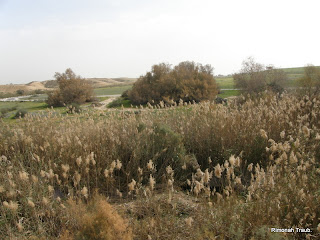 The Suspension Bridge over Nachal Habesor does not lead anywhere specific, but it allows one to cross the stream and reach the opposite bank, from where magnificent panoramas of the area — with its flowing streams — can be viewed. Many enjoy the trek across the 80-meter-long suspension bridge, while others find it a little unnerving. Children in particular will either love or hate the experience.

Nachal Habesor is one of the largest and most impressive streams in . It plays a strategic role since it lies on the boundary between the  region and the desert region. It begins at   (near Sde Boker) and runs into the  in the Gaza Strip, where it is called Wadi Gaza. Joining Habesor Stream is the Be’er Sheva Stream and its tributaries, Hebron Stream, Secher Stream and Gerar Stream. The drainage basin for the Habesor Stream system is 3,650 sq. km.

Nachal Habesor forms the southern border of the Biblical “Negev,” which included the ancient cities of , Be’er Sheva, Gerar and Ziklag.

Sefer Shmuel recounts the story of Dovid’s army (before he was king), some 600 strong, who stopped to rest here. They had been chasing the Amalekites, who had broken into the Israelite camp and kidnapped all the women and children and burned everything else to the ground.
By the time, the army reached the Besor brook, a third of the soldiers — 200 men — were too exhausted to go on. Therefore, Dovid set off with only the remaining 400, and still managed to subdue the Amalekite camp. (Shmuel I; 30). The “besorah” — good news — was that all the women and children were recaptured untouched. In Hebrew, the word besor means “cheery,” and a related word, besorah, means tidings, or pleasant news.

By Dovid‘s order, they all shared in the wealth of the booty captured. Dovid ruled that “everything any of us has is a gift from HaShem,” and he ordered everything divided equally, even among those who did not cross the Nachal Habesor (Shmuel I, 30:24-25).

There are two reasons mentioned why the 200 men stayed behind. One is because they were weak, the other because Dovid did not think it was necessary to take them along. 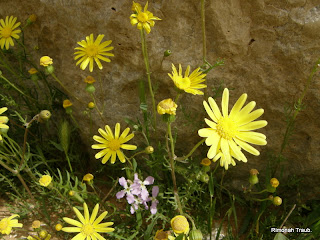 The passuk says that Dovid established a “chok u’mishpat for Yisrael until today,” that the spoils are shared even with those who did not actually fight but who only watched the keilim back in the camp. Perhaps it is because those who stayed behind, learned, and prayed for the success of the fighters deserved a share, honestly.

Today, the good besorah for the weary traveller remains the same: Linger as long as you like at Nachal Habesor; the beauty of Eretz Yisrael is Hashem’s gift to us all.