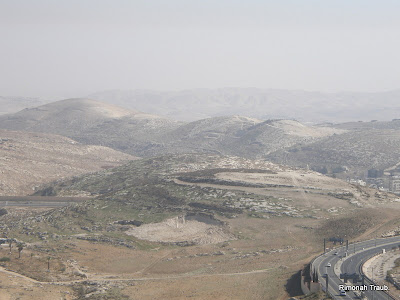 At    and  , located at the edge of ’s bustling city life, the beautiful, austere wilderness of Midbar Yehudah is observed in full view. The contrast between the city and desert is stark and startling.

Today the whole vicinity of the  , including the    , is called Har Hatzofim (), even though the area is actually an extension
of the Har Hazeisim range that is famous for its cemetery. Not wanting their university to be referred to as “Der Toiter (The Dead) University,” the University’s founders called the area Har Hatzofim.

Over and down in the valley on the other side of the road (and not visible from the G.H.P.
), the Emek Tzurim valley lies between   and the  of
. In the center of the  one can see the Temple Mount Archeological project, located in a large tent. In this tent, artifacts uncovered in illegal Muslim excavations of the  and discarded as trash, are gathered up by Israeli archaeology students and sifted carefully, with many remains supplying evidence from the periods of the first and second Beis Hamikdash. This project is but a small effort to stem the problem whereby Muslims are destroying centuries of history.

The  straddles the boundary somewhere between the Shevet of Yehudah and Binyamin’s allotments. (Nowadays it very hard to define exact Biblical borders.) If we had been at this spot during the time of the Beis Hamikdash, we could have crossed the road andlooked down over the  directly onto Har Habayis. We would have been privileged to see the Beis Hamikdash in all its glory. Even at the place of the lookout point, the perfume of the ketores would have enveloped us and the smell of the korbanos would have wafted over to us. On Yom Kippur, the sa’ir l’Azazel goat was led though the expanse one sees.

During the time of the Beis Hamikdash, a month before the arrival of Pesach, a special official was appointed to oversee those labourers who were sent to restore the weather-beaten roads. He would also make sure that the wells and mikvaos were renovated, and that the fruit trees, planted along the way for the olei regel, were in good condition. The official was also responsible for checking and repairing all the byways, including those in Midbar Yehudah, ensuring they were in excellent shape.

There were 40 roads leading to Yerushalayim. One passed by  and continued on to where
Maale Adumim is today, then moved downward and cut through to arrive directly at Har Hazeisim, perhaps passing the spot where the    and  is now found.

On a clear day, looking out from the  over Midbar Yehudah, the Dead
Sea is visible with the purple Harei Moav mountains behind it. These hills are the portions of the Shevet of Gad in the north and Reuven in the south. Somewhere in the region of the areas of these tribes is Har Nevo, the burial place of Moshe. Midbar Yehudah is the smallest desert identified in the world:  wide and  in length (from north to south). The fact that it is in a lowlying region puts it in the “rain cloud shadow,” thereby making it desert. (A “shadow” is a place bereft of sun. A “rain cloud shadow” is bereft of rain.)

The rain clouds coming from the west (Mediterranean Sea) move inland until they encounter the height of  above sea level (this is approximately the height of Jerusalem), where they unload their water. They then travel downwards into Midbar Yehudah. This combination of lowering of land height and resultant air pressure seems to curtail the clouds from discharging their water; it even seems they have no water to provide. As they approach Harei Moav, the altitude increases and this somehow activates the clouds to give rain again. Therefore, this area became known in Biblical times as the “bread basket.” It is where Elimelech, Naomi and their two sons fled, to avoid helping the poor during the famine in Eretz Yisrael. It was from here that Nomie brought back Ruth the ancestress of Dovid.

The expanse of Midbar Yehudah, as one can see from the observation point, has for most of its history been barren. It is only in the last few decades that both Jewish and Arab housing has sprung up here. Such settling occurred after the Six Day War, when there was a “political land grab” and anyone settling in any given area could claim it as their own.

The red roofs of Maale Adumim are distinguished far ahead, to the right. The name Maale Adumim is derived from sefer Yehoshua (15:7), in which Maale Adumim is described as a border area between the tribes of Yehudah and Binyamin. Maale Adumim means the “red ascent”; this is the only significant uphill section of the road from  down to  and the , and the route is dominated by reddish hues in its rock formations.

Today’s city was launched by 23 pioneer families on the seventh night of Chanukah, 1975. The population of Maale Adumim in 2011 numbered above 39,000 and it is the third-largest settlement in the area regained by  in 1967.

The Arab settlements of al-Isawiya, Bitana, Anata and al-Za’im can also seen relatively nearby, large and sprawling. Located  northeast of , Anata is identified by some as the Biblical Anatot, birthplace of Yirmiyahu. Also observed is Road number One, the lowest road on earth, which curves beneath the . Running parallel to it is the security fence. In July 2004, the International Court of Justice in  officially ruled that  was not allowed to build a barrier. The U.N. endorsed the ruling. Some of the hate-filled nations who claim that  has no right to a defensive fence, themselves have fences to keep out migrant workers. Note: their barrier is for financial gain and not for pikuach nefesh as with us Yidden. However, this should not surprise us. As we declare on the Seder night "Bechol dor vador ....." "In each generation they rise up against us, to destroy us and Ha Kodosh Buruch Hu saves us from their hand."
The    and  is not wheelchair- or stroller-friendly, being that it is covered with coarse gravel, which makes manoeuvring wheels very difficult. Nevertheless, quite a bit of the view can be seen from the tarmac road.