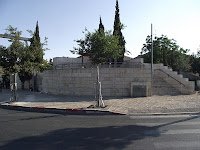 Overlooking the busy Kvish Chail Handasah (Highway One), at the corner of Haneviim Street, is Mitzpe Tomer. The lookout is named to commemorate a 19-year-old Israeli border policeman, Mordechai Tomer, who was killed when a traveling car bomb detonated in April 2002.

From the lookout one sees Shaar Shechem (Damascus Gate) to the right. Damascus Gate is the largest and most ornate of all Yerushalayim’s nine gates. Some of its stones were taken from the Herodian Har Habayis complex. It is located on the northern side of the city at the edge of the Arab bazaar and leads directly into the Muslim Quarter of eastern Jerusalem.

On Fridays, crowds of Muslim worshipers make their way through this gate to the Al-Aksa Mosque on Har 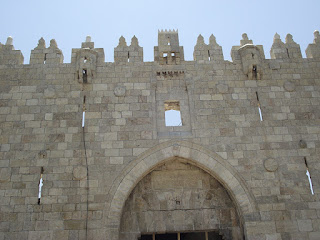 Habayis. A large plaza, where street vendors sell souvenirs and refreshments, is found in front of the gate.

Avraham Avinu traveled through Shechem, where he built an altar and offered a sacrifice to Hashem (Bereishis 12:6-7). In this week’s parashah (ibid. Chap; 32, 34), when Yacov Avinu returned from Charan, one of the first things he did was buy a land in Shechem as there is an inyan to own land in Eretz Yisroel. The Klie Yakar says he wanted to to build an alter on his own land. The midrash says Yacov Avinu made Techomay Shabbos in Shechem.  It was in the area of Shechem that Dinah was kidnapped by Chamor in 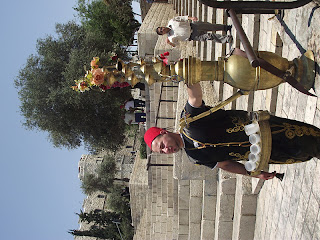 Shechem. Also it was to Shechem that Yacov sent Yosef to find out about his brothers.
It was a central city for the Ten Tribes, and Yeravam chose it to become the first capital of the Northern Kingdom of Israel (Melachim I 12:25).

The Arabs call this gate Bab-al-Amud (Gate of the Column) to recall the tall pillar that stood in the gate’s
plaza during the Roman and Byzantine periods. During the Roman era a victory column, topped with a statue of Hadrian, stood in front of Shaar Shechem. (This is depicted on the Madaba Mosaic Map that is part of a
floor mosaic in an early Byzantine church in Madaba in Jordan. A copy of the map can be seen at the Cardo.)
Damascus Gate was used as the spot from which the Romans measured the distances from Jerusalem to all 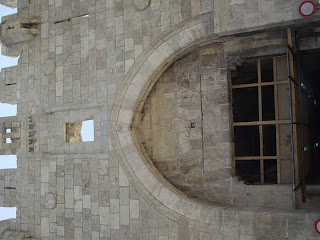 the towns and cities in the country. The Arabs call this gate also by the name “the Gate of Triumph” in reference to the pillar.

An inscription on the outside of the gate testifies it was built in 1538. The Ottoman ruler, Suleiman the Magnificent, constructed it on top of two older gates— one built by Herod the Great and another by the Roman Emperor Hadrian. It was built primarily for defensive purposes, with slits for firing at attackers, and an opening for pouring boiling oil on enemy soldiers trying to climb the wall.

Shaar Shechem is flanked by two towers, and there is a small amphitheatre in front of the gate. Above the gate with its elaborate crenellations is inscribed, “There is no G-d but All-h,and Mohammed is His messenger” (by which, I heard Rav Avigdor Miller say, the Muslims really mean, “There is no god but
Mohammed, and All-h is his messenger.”)

In 1937 there was discovered under Damascus Gate the remains of an ancient gate to the Roman city of
Aelia Capitolina, which Emperor Hadrian built (circa 132 C.E.) on the ruins of Yerushalayim, in an attempt to
eradicate the city. The Roman gate led to the Cardo.

In 1972, Rabbi Meir Kahane proposed that in order to secure the Jewish claim to Shaar Shechem, a mezuzah be affixed to it. After repeated protests from Arab residents of the area, though, the Israeli government refused to consider Kahane’s proposal. 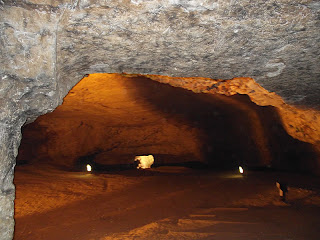 A fascinating site beneath Damascus Gate is Tzidkiyahu’s Cave, also known as Solomon’s Quarries. It is a 20,000-square-meter limestone quarry running under the Muslim Quarter for a full five blocks, making it the largest man-made cave in Israel.

Straight ahead, looking out from Mitzpe Tomer, is the site where Kiryah Ne’emanah (Battei Nissan Beck) was founded in 1879. Chassidim purchased the area in order to build the ninth colony founded beyond the Old City walls. Thirty houses were built by the chassidim, and the other half of the area was built up by Persian Jews. 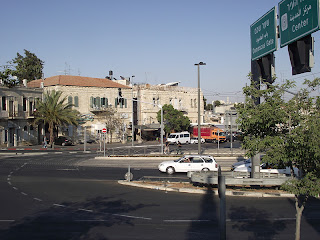 During the 1929 Arab riots, Kiryah Ne’emanah was subjected to terrible Muslim fury. The residents were murdered and plundered by the Arabs. The three shuls of the area were vandalized and then set on fire. After the riots, only a handful of Jews returned and the rest of the homes were occupied by  Muslims and Christians. In 1948 the last of the Jews in the neighborhood left the area, escaping before eastern Jerusalem and the Old City were occupied by the Arab forces.
Published in Hamodia

Posted by Eretz Yisroel in the Lens at 7:43 PM