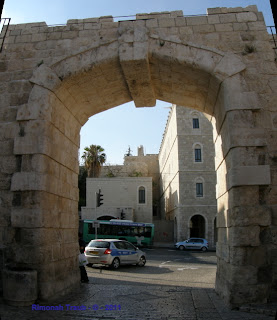 The most recent gate to be built into the Old City walls is called Hashaar Hachadash (New Gate), or “Bab
es Sultan Abd ul Hamid” in Arabic (Gate of Hamid) as it was built by the Turkish Sultan Abdul Hamid II in
1887 at the request of some European governments who had influence with the sultan. It was intended to
provide the shortest direct access into the Christian Quarter and was built on the northern wall to allow easy access in and out of the Old City for people who were settling outside the city walls in the New City, as it was known in those years.

The gate faces north and is situated in the northwestern part of the Old City walls. It is the highest of all the gates, at about 790 meters above sea level. Hashaar Hachadash is unadorned, but has crenellated stonework surrounding the arched doorway.

During the 1920s and 1930s the New Gate included an iron gate, which was operated by the police. It was
open and shut as per administrative regulations. On the afternoon of Friday, Aug. 23, 1929, an unprovoked
attack between the New Gate and Damascus Gate by the Arabs of the Old City, resulted in the murder of several innocent Jews. The Muslims had been inflamed by sermons during their noontime prayers.

The Stern group (Lochamei Cherut Yisrael — Lechi) attempted to demolish part of the wall next to the New
Gate on Nov. 15, 1945. They used a massive device that required 10 men to carry and place it; however, it failed to function.

This gate was closed and sealed off by the Jordanians in 1948, and the Jordanian “New Gate Outpost” was established on top of it. After the miraculous Six Day War of 1967 the Israeli Army reopened the gate for the first time in 19 years. 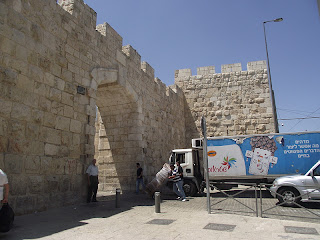 Today the gate itself is maintained and supervised by the Israel Antiquities Authority under the “preservation
orders.” The land around the New Gate is largely owned by the Latin Patriarchate and the Franciscan Order, which have refused to sell it to the Israeli government.

Many thanks go Rav Mordechai Y. Scher for his help in preparing this article.
Posted by Eretz Yisroel in the Lens at 12:02 PM