Tel Aviv and Its Skyscrapers© 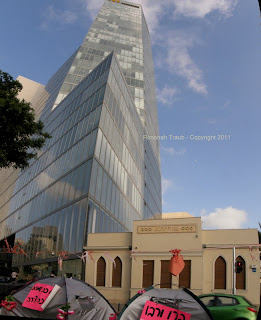 By Vardah Littman.
Photos by Rimonah Traub.
Whenever I find myself in Tel Aviv (I must admit it is not too often), I am amazed by the miracle of its phenomenal growth. Tel Aviv reminds me of a phoenix that is reborn and arises from destruction. It was just 65 years ago that the Holocaust decimated our people, and we are a little country always at war with the millions of Arabs who surround and vastly outnumber us. But despite these adversities, with the grace of the One Above, we have managed to build the skyscrapers of Tel Aviv. The physical growth of this teeming metropolis is for me a metaphor for the spiritual growth of the Torah community in Eretz HaKodesh. 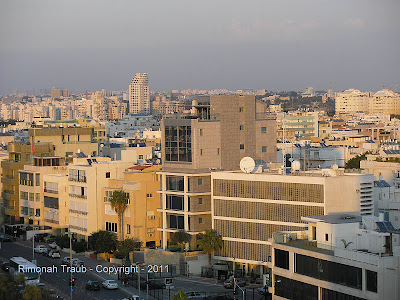 Tel Aviv was established in 1909 by 66 Jewish families who were living in . The terrible living conditions of 's Jews; the poor sanitation and congested housing, the badly lit streets, and worst of all the "Muhram" decree which forced Jews to change their dwelling annually, compelled these people to seek to better their lot.
The official establishment of Tel Aviv was the ceremony of the seashell-lottery for the plots of land, which took place on the second day of Passover 1909.  Once enough people had registered for the new neighborhood, land was purchased east of today’s Neve Tzedek, not far from the beach. The land was divided into 60 plots.  The lottery was held to ensure a just and unbiased allocation.
The participants gathered on the sand dunes by the beach while Arieh Akiva Weiss, chairman of the lottery committee, gathered 60 gray and 60 white shells. He wrote the names of the participants on the white shells, and the plot numbers on the gray shells. Weiss had aptly chosen seashells as lots. After all, at stake was nothing less than the allocation of the first plots of the new developing city on the shores of the .
At first the neighborhood was called “Ahuzat Bayit” but a after a short while a fierce arguments arose regarding the name. Various other names were suggested: New Jaffa, Neve Jaffa, Aviva, Yefefiya, Pirchyah and Sha'anana Herzliya, Finally, Menachem Sheinkin suggested Tel Aviv. Sheinkin felt this was an apt translation of the title of Herzl's book "Altnueland," Like the German term, it involves a play of words between "old" and "new". In Hebrew, "tel" means a mound of ancient ruins and "aviv" means spring. Thus "Tel Aviv" balances a sense of the new (renewed) with a sense of the ancient heritage. A vote was taken with Tel Aviv scoring 20 votes compared to 15 that had been cast in favor of Neve Jaffa. The name expressed the idea of a renaissance in the ancient Jewish homeland. The name Tel Aviv is found in Ezekiel 3:15. 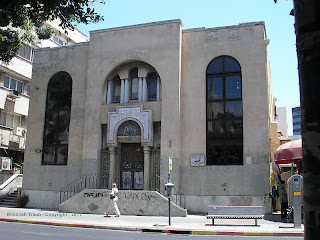 Today Tel Aviv is the second most populous city in Israel, with a population of 3.3 million residents as of 2010.  It is the largest and most populous city in the metropolitan area of Gush Dan.The city has 544 active synagogues with daily prayers. These include historic buildings such as the Great Synagogue, established in the 1930s. Rav Israel Meir Lau is Chief rabbi  of the city.


Israel's first skyscraper, the Shalom Meir Tower, with 34 floors, was built in Tel Aviv in 1965 and remained the country's tallest building until 1999. The Azrieli Centre in the neighboring city of Ramat Gan, composes three buildings— one square that has 42 floors, one triangular with 46 floors whose largest occupant is Bezeq ; and one circular at 49 floors— and therefore usurped the title of tallest building. Since 2001, Israel's tallest building is the City Gate Tower with 68 floors which is also located in Ramat Gan, while the country's tallest wholly residential building, the W-Tower, is in Tel Aviv.
Published in the "English Update".
Posted by Eretz Yisroel in the Lens at 5:57 PM

Labels: Tel Aviv and Its Skyscrapers