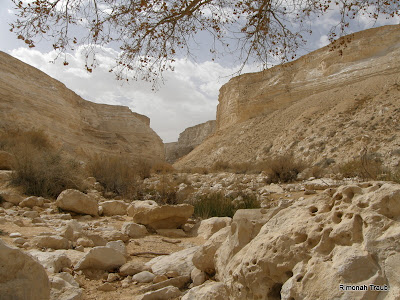 Read about this magnificent location and plan on taking your family on an exhilarating trek through the canyon on Chol HaMoed.
By Vardah Littman
Nachal Zin
Ein Avdat with its impressive cliffs is a place to look up and around and exclaim, "Wow, ein zur ke’Eloknu” - who can paint as magnificently as Hashem?"  Ein Avdat is a spectacular narrow canyon flanked by tall white cliffs occasionally streaked by dark flint. It is part of Nachal Zin, the largest wadi or dry riverbed in the . While it is wise to watch your step, make sure to look up and ahead to take in the view of the canyon as it rises above you.
The 120 kilometer-long riverbed of Nachal Zin begins at the northwestern tip of Makhtesh Ramon and heads north. At the Ein Avdat canyon Nachal Zin's route changes abruptly and starts veering sharply eastwards. This change of direction is beneath the hanging Tzinim Cliffs where spectacular canyons, rich in water resources, are found. 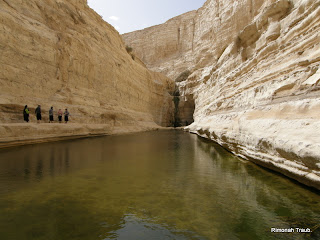 The springs in Ein Avdat feed several small rock pools year round, making it a rare water source with luxuriant fertile vegetation in the parched  desert. They are active all year round although the flow varies throughout the seasons. Even in the middle of summer, they pour forth water to create a cool and deep pool. These springs emerge from between horizontal layers of rocks. The definite source of the water is unknown. The region is arid, and during rainfall the runoff does not infiltrate, but drains away along the wadis. The current theory is that the springs come from flash flood water that has seeped down through the stream bed gravel.
The Ibex, King of the Cliffs 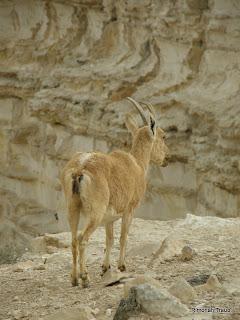 The water source of Ein Avdat sustains a variety of fauna and flora. The flourishing environment is caused by the water of numerous springs that begin at the southern opening of the canyon and descend into deep pools in a series of waterfalls.
Ein Avdat is the home of the king of the cliffs, the graceful ibex, a species of wild goat, which thrive on the vegetation of Ein Avdat. With their brown hide, solid and muscular body, and specific feet/leg structure, they are perfectly suited to the surroundings. As it says in Tehillim 104:18; Hashem creates a perfect setting to suit each species and cites the ibex’s habitat.
These animals are famed for their ability to climb steep hills that provide them with refuge from predators. An interesting behavioral pattern was observed in groups of ibex in the  area. All the young were placed on a steep cliff which they were unable to leave. From time to time, the mothers would come to feed them. The offspring would leave this special “nursery” only when they grew and were old enough to fend for themselves. This is how the ibex protect their young from predators such as wolves and leopards.
Males and females can be clearly distinguished from each other. Adult male ibex stand out for their scimitar shaped horns (large and bent backwards). The male's horns serve as a means to reduce the number of male rivals. The male is large, muscular, and heavy, and the back of its neck is well developed. The females are smaller with slender, short horns that bend slightly to the rear. The ibexes live in separate male and female (plus kids) herds.The ibexes can be spotted early in the morning and in the afternoon and are most friendly to people. They descend the cliffs to eat and drink near the springs. At one point, ibexes were endangered. Today, due to enforcement of nature preservation laws, the number of ibexes has increased.
Ibex are mentioned in Tanach many times by the name “yael.” For example, in Shir Hashirim (Chapter 2), Shlomo HaMelech uses the swift leaping of the ibex as a metaphor for how swiftly Hashem redeemed us from  and will redeem us again, may it be, in our times, soon.
The Rich Variety of Flora and Fauna 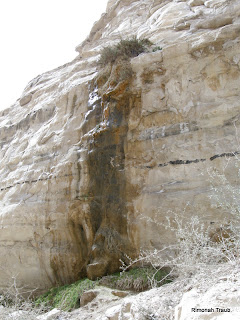 The lush vegetation of the area of the springs attracts a rich variety of insects such as dragonflies, as well as songbirds.  There are the Bulbuls, swifts, rock pigeons and doves. The area serves passing waterfowl, such as coots and land fowl like partridges and herons.
The canyon cliffs are used by eagles as nesting spots. Other birds of prey that can also be found are vultures, hawks, and bustards. There are rising airflows near the edge of the cliff which the birds of prey use to fly up high. Frogs and rodents also inhabit the place. The ostrich egg shells and onager bones found in the area show they also once lived here.
Around the springs and bubbling brooks grow salt-loving plants such as Atriplexes, commonly known as saltbush, which can tolerate high salinity. Tiny hairs on its leaves absorb the salt and then fall off, allowing the plant to survive. The accumulated salt makes the green leaves look silvery.
A lone Atlantic terebinth tree estimated to be 350 years old can be seen to the left of one of the trails. Poplar trees common to oases and known for their variegated leaves, grow in the streambed.
The poplar is a tall tree which flourishes on riverbanks and can tolerate a certain amount of salinity in the ground. It has two types of foliage: the younger long leaves and wider more mature diamond-shaped leaves. This is a deciduous tree which loses its leaves in winter. The poplar may be the tree referred to in Bereishis 30:37 which had a major role to play in the genetic feat that  Yacov performed on the sheep.
The leaves of the poplar have prominent gallnuts, shaped like a white half ball (gallnut means a swelling or growth in the leaf following penetration of a foreign body, such as laid eggs or insect sting). The poplar gallnuts contain pests that excrete a sweet substance which the weaver-ants inside the tree feed on.
The weaving ant weaves a nest to protect the cicadas (sound producing grasshopper-like insect) from the sun. The cicadas drink the plant sap of the tree. Here we can see the workings of a wonderful harmony that Hashem created in nature.

Ein Avdat Throughout History
As a water source in the middle of the desert, Ein Avdat and its surroundings have been visited and inhabited by different peoples for thousands of years, but apparently only sporadically. Abundant flint artifacts such as arrow-heads, man-made knives, and other hand held stone implements have been found dispersed throughout the area.
During the Hellenistic period, the nearby city of  was a station along the Nabataean Spice route (an ancient trading route stretching across  to  through the ). The name of the area is derived from this period. “Ein,” the Hebrew word for spring or water source, refers to the various springs located in the canyon, while the word “Avdat” stems from the neighboring city of  situated south of the canyon.
Avdat’s wind-blown ruins are located on a mountainous limestone ridge overlooking the  highlands.  The city of  was apparently named after the Nabataean King Obodas I who was buried there according to tradition. The name was then Arabized to “Abdah” and finally Hebraicized to “Avdat.” Thus, Ein Avdat is the Spring of Obodas. Located near the northern entrance of the Ein Avdat is a spring called Ein Mor, named for the spice myrrh.
In the Byzantine era, Avdat developed into a Christian city, and the  was inhabited by monks who lived in its caves in the cliffs above. These monks sculpted out stairs and water systems all over the area. In the several small caves which served as monks’ cells they carved out closets, shelves, benches, and niches that were cut open to create windows. After the Moslem conquest, the region was abandoned.
Ein Avdat Today
Ein Avdat became easily accessible in the 1950s after the establishment of Kibbutz Sdeh Boker in 1952 (home of Ben Gurion) and the Highway 40 to Eilat. The trail going through Ein Avdat was constructed in 1956, and now it is included in the Israel National Trail. The stairs that lead to the beginning of the Avdat waterfall were first carved out by Israeli teenagers in 1956, and then improved by the National Parks Authority. 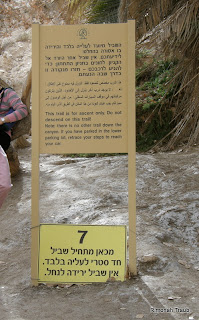 Due to the magnificence of the steep canyon in which it is located, it has become a popular hiking spot. There are a number of hiking trails throughout the canyon that were designed to protect the enchanting landscape from wear and tear. These hiking trails range in levels of difficulty from easy to moderately challenging. Some require climbing up ladders of iron rungs in the rock faces. One trail ends at the observation terraces showing a magnificent and exhilarating look down the canyon.
The following is required equipment for trekking in Ein Avdat: hats, 1.5 liters of water per person (drinking the water from the springs is not recommended), sturdy walking shoes with non-slip soles, clothing appropriate for the season, sun protection cream, and a camera (you'll be sorry if you don't). And last but not least, bring along bags to take your rubbish out of the canyon with you.
The most direct entrance to the canyon is from the south (the top of the canyon), but many hikers choose to begin at Sdeh Boker (the kibbutz several kilometers north) and walk southward to see the whole length of the canyon.
Ein Avdat is located on Road 40 between Mitzpe Ramon and Beer Sheva in the . The entrance to the northern parking lot is by Road 40, some  to the south from Beer Sheva. The road sign shows a turn to the left for the Ben Gurion burial ground and for Ein Avdat. To get to the southern parking lot, continue some five km. to the south.  A leaflet with a site-map is available at the admission booth. There are rest rooms and water facilities in both parking areas.
Posted by Eretz Yisroel in the Lens at 3:06 PM