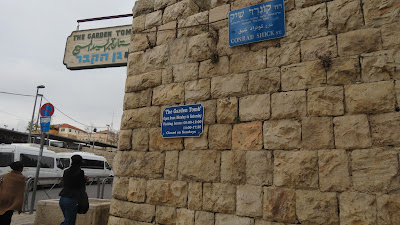 My father, a”h, used to tell a story of a door-to-door salesman who came to sell a chicken to a homeowner. The baal habayis took one look at the fowl and recognized the hen that had been stolen from his backyard a few weeks previously, now plucked of its beautiful feathers and dressed in a new plume. This, said my father, is what missionaries who knock on Jewish doors, disseminating their literature, are doing. They took our holy Tanach and “plucked” it of its real meaning, then added to it a new plume of their interpretation in the form of the New Testament.

Not only was the “pullet” stolen, but many other things were expropriated. The Kever Yirmiyahu and Yeshayahu, now called the “Garden Tomb” (Gordon’s ) located on Conrad Schick Street (a narrow lane up ), is a clear case of such a felony. Claimed only since 1867 by the Protestant denomination to be the grave of the Nazirite (other Christian sects have different sites), this is the most visited tourist attraction in .

In any event, the timeline of the tomb caves does not fit into their fraudulent theory. According to Gabriel Barkay and other archeologists, the caves are from the Bayis Rishon period and not the late Bayis Sheini era, as they want to claim.

The Arizal identified this multiple gravesite as the Chatzer Hamatarah (Courtyard of Confinement, i.e., a jail) found in Chapter sefer Yirmiyahu. This was the place of the Navi Yirmiyahu’s imprisonment and also the place he prophesied from when he was held there.

Although Yirmiyahu was placed in prison by King Tzidkiyahu’s nobles and not by the king himself (Yirmiyahu 32:2 says that Tzidkiyahu jailed the navi), Me’am Lo’ez explains that the king was held responsible for the captivity of Yirmiyahu since he had the power to release him.

When Yirmiyahu was incarcerated, Yerushalayim had already been under siege for a full year. Yirmiyahu predicted that Tzidkiyahu would be not be able to escape the Chaldeans and would be captured by them. This statement cast doubt on Yirmiyahu’s credibility as a prophet and led to his arrest. The cause for this was that Tzidkiyahu had constructed an underground escape route, which he planned to use in the event the city would fall. (More on this cave next week).

Tzidkiyahu’s plan was foolproof … except for the fact that Hashem runs the show. When Yerushalayim was taken, the king, his sons, and the Sanhedrin used the passage to exit the city. But a deer traced their path above ground. Babylonian soldiers gave chase to the animal and they reached the deer just as it came to the exit of the escape cave from which the king and his party were emerging. With the capture of Tzidkiyahu, the heavenly prophecy of Yirmiyahu was fulfilled.

While in confinement, Yirmiyahu bought a field from Chanamel ben Shalum, his cousin who was also his uncle on his mother’s side. According to some opinions, the entire episode of the transaction and the placing of the deed of sale into a clay vessel in order to preserve it were symbolic. It was meant to testify to Am Yisrael’s eternal link to Eretz Yisrael.

In the 38th Perek  of sefer Yirmiyahu relates how Yirmiyahu is thrown into a pit with quicksand in the Chatzer Hamatarah. Ebed–Melech, the Cushite, told King Tzidkiyahu what was happening to the navi. Rav Yosef Karo says Ebed–Melech was an African of the Negro race and he was either a ger, a ger toshav (a gentile temporary resident), or a slave who had no interest in the controversy.

The king ordered Ebed–Melech to take 30 men and pull Yirmiyahu out of the pit. The reason for so much manpower to raise Yirmiyahu was because they were all weakened by the famine resulting from the siege.

The Negro slave made every effort to lessen any possible physical pain to Yirmiyahu. Searching for and taking old cloths from the treasury room, he had Yirmiyahu place the rags under the ropes to ease the bite of the ropes that were dragging the navi out of the hole.

The Midrash tells us that at first when Ebed–Melech called into the pit, Yirmiyahu did not respond for he did not know who it was and feared the intentions of the caller. The slave, dreading the worst, began sobbing. Yirmiyahu then asked who was crying. That is when Ebed–Melech sent down the ropes and the rags.

The king summoned Yirmiyahu to him and asked the prophet to advise him. Yirmiyahu told him to surrender to the King of Babylonia. The king asked the prophet not to disclose subject of their discussion, but that rather he should say he had been pleading for his life before the king. Yirmiyahu was then returned to the Chatzer Hamatarah where he remained until the day Yerushalayim was captured.

The Metzudos David says he even remained there after the city was defeated and he could have fled. During this period of his imprisonment, he no longer prophesized or admonished as he realized it would not help. Some speculate that he spent this time completing sefer Eicha.

We have a tradition from the 10th century that the Arabs call this place Jib Armayayha — the . Damascus Gate, which is in very close proximity, was called by them Bab-al Armayayha. Aharon Bier, z”l, notes that Shaar Haprachim, a little further down, was also known as Shaar Guv Yirmiyahu, the Gate of Jeremiah’s Den.

In many travel logs of Jews in the Middle Ages who came to the Holy Land, the cave of Yirmiyahu is said to contain the graves of both Yirmiyahu and Yeshayahu. The Arizal also identified it as such. The largest Roman wine-press in the area is found in this place.

As one stands by the , one can see the other side of the Chatzer Hamatarah compound with its complex of caves and Christian-planted vegetation peeking over from the side. The area beneath it has been turned into an Arab bus terminal, which albeit dilapidated, is still in use.

Posted by Eretz Yisroel in the Lens at 10:46 AM