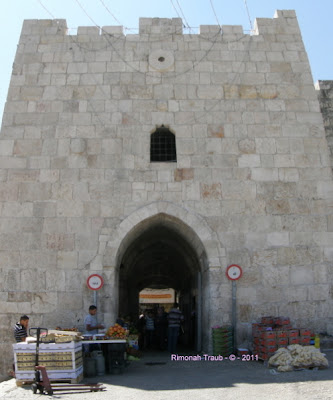 Located in the northeastern section of Yerushalayim‘s Old City walls, at an elevation of 755 meters above sea level, this gate opens into the heart of the Muslim Quarter, which is full of small shops and houses. The gate’s names are both interesting and varied: Shaar Haprachim, Bab al-Sahira, ShaarHordos, Sheep’s Gate, and
Jeremiah’s Den Gate.

There are a number of reasons why this gate is called Shaar Haprachim, which means the Gate of Flowers. Firstly, it is because of the floral designs engraved on the wall above the gate: a large, engraved stone flower above the alcove that is flanked by two smaller flowers. Another reason for its name is that local merchants sell fruits and flowers near the gate’s entrance.

The Arabs used to call the gate Bab al-Sahira, the meaning of which is Gate of the Cemetery, because of
the Muslim burial grounds opposite the gate. However, no one wanted to reside in a “cemetery neighborhood,” so they altered one letter, which changed its name to Bab al-Zahira, meaning Gate of Flowers.

Scholars disagree as to whether the name Shaar Hordos (Herod’s Gate) refers to Herod the Great, who
rebuilt the Second Temple, or to his son, Herod Antipas, whose house is claimed to have been situated at
this spot. It is also claimed that this part of the city was not enclosed by a wall during the reign of Herod the
Great.

The name Sheep’s Gate derives from the fact that it led to the sheep market in ancient times. This name is mentioned in Nechemiah 3:1. When Nechemiah came up from Bavel to Yerushalyim with his followers
to rebuild the desolate city, they rebuilt this gate.

Aharon Bier, z”l, notes that it was sometimes known as Shaar Guv Yirmiyahu, the Gate of Jeremiah’s Den.
Apparently, the place of the Navi Yirmiyahu’s imprisonment was nearby (see Yirmiyahu 32:2). The grave of 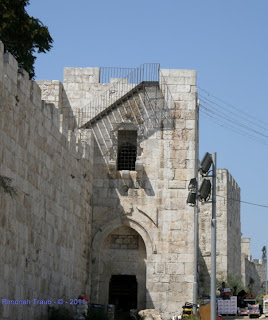 Yirmiyahu, which is also claimed to be the place he prophesied from, is quite near this gate, opposite Tzidkiyahu’s Cave.

In 1967 the IDF attempted to enter Yerushalayim via this gate, but they were repelled. The next day, though, they succeeded by way of Lions Gate. In various excavation projects between 1998 and 2004, archaeologists of the Israel Antiquities Authority dug in the eastern area of Herod’s Gate. The digging, which focused on three separate areas adjacent to the wall, uncovered nine archaeological layers. Among the
discoveries were structures from the period of the Second Temple and a complete segment of the Byzantine-Roman wall. Remnants of massive construction underneath the wall were also found. These were identified as portions of a fortification from the ancient Muslim period and from the Middle Ages. These discoveries show the need for fortification throughout the ages on this northern side of the city of Yerushalayim because of
this side’s vulnerability. As Yirmiyahu proclaims — “evil will come from the north.” In contrast, the topography of the other three sides of the Old City provide natural fortification.

Throughout the history of Yerushalayim, Herod’s Gate was a place of nonstop bloodshed. Most invaders,
including the Babylonians, Romans and Crusaders, came to Yerushalayim from the north and invariably
used Sheep’s Gate and its adjacent walls to get into the city. When the Crusaders entered via this gate, they
slaughtered all the Muslims and Jews on their way, in order to “free” Jerusalem of “infidels” and “heretics.”

Many thanks go Rav Mordechai Y. Scher for his help in preparing this article

Posted by Eretz Yisroel in the Lens at 7:44 PM