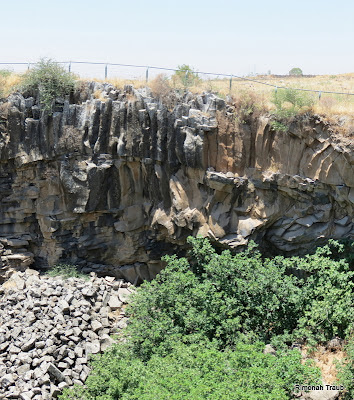 If you love nature but don’t like hiking, there is a beautiful site in the Golan just for you. Take Route
9088 south from Katzrin till you reach Route 87. On Route 87 keep going east until Route 808. Then take 808 southward to the Ayit Fall turnoff, to arrive at Mapal Ayit. A few steps from the parking lot, one crosses over a wooden bridge to stand on the built-up outlook and enjoy the Ayit waterfall. The fall’s name, Ayit, means hawk. Continue on the loop path after the observation point for a view of another waterfall. The path is wheelchair accessible.

The stunning vistas that can be observed along this pathway at any time of year will amaze you. In the winter and early spring, the waters roar down the rocks of the waterfall as they make their way directly to the Kinneret. The rolling hills and mountains are lush with greenery, and colorful seasonal flowers bloom in the surrounding fields and on the rocky cliffs. 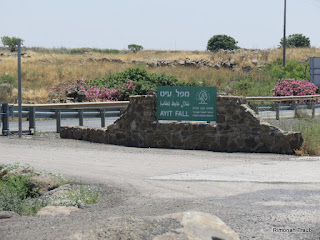 In the summer, the sheer magnificence of the uncovered brown/black hexagonal basalt cliffs of nachal achzav (dry-river) makes the Ayit Fall even more breathtaking. These basalt columns are said to be formed from volcanic rock that is found in the Golan.

Standing on the observation terrace and looking down, you see that the river bed is fringed on either side with typical river vegetation. Arvei nachal (willows) are found in abundance. It says in the first perek of Tehillim, “And he shall be like a tree planted alongside brooks of water.” Salix acmophylla and Salix alba (willows of the brook) — as well as hybrids of both species — grow wild and rapidly on the banks of streams and rivers in Israel. All that is needed for it to take root and reproduce is for its branches, broken off by the wind, to get stuck in mud as they are swept away by the current.

We find that the willow is described in Tanach as a tree that grows rapidly near water (Isaiah 44:4). It
can reach a height of 8 meters, but is usually not more than 5 meters. The branches are reddish, and the leaves on their upper side are somewhat shiny while on the lower side they are bluish. It blooms in the spring, at the same time that its leaves sprout. The flowers secrete nectar (a good source of bee food), and are pollinated by insects as well as by the wind.

The dry fruit opens into valves with many seeds. Each seed is equipped with a tuft of hairs that helps it
be dispersed in the wind. The entire ground is often covered with threads of salix seeds, and the air is filled with them. This fruit contains soft fibers, which arethe petilat ha’idan (“wick of bast”), which the Mishnah (Shabbos 2:1) says may not be used as wicks on Shabbos.


Tehillim 137 describes how all the exiled Leviim hung their harps on willows by the rivers of Babylon. When the exiles reached the shores of Bavel, Nebuchadnezzar, accompanied by his royal
court, was sitting on a magnificent ship, being entertained by an orchestra. The rasha demanded that the Leviim sing before his idols the songs that they used to chant for Hashem in the Beis Hamikdash. Each and every Levi bit off his thumb in order to not comply, simultaneously hanging their harps on the willows along the Pras River bank. 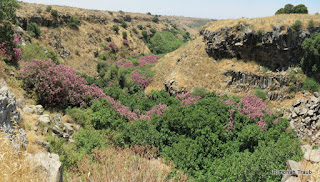 One of the arbaah minim taken on Sukkos, the willow is characterized as possessing “neither taste nor fragrance,” thus symbolizing those among Yisrael “who are neither learned nor possessed of good deeds.” One might think there is no hope for those who have no Torah knowledge. To tell us otherwise,
we bind the aravah together with the other species, indicating that by joining forces with Torah scholars and supporting Torah institutions, those ignorant of Torah can gain merit. We tie all the species together to show that each makes up for the others’ failing.

When the Beis Hamikdash stood, during Sukkos the huge willow branches — each 11 cubits long (approximately 17-22 feet) — were brought from Motza, a valley near Jerusalem, and used to decorate
the altar. The branches would be placed upright on the base of the Mizbe’ach on all of its four sides. They would extend a cubit over the top of the Mizbe’ach, with their tips hanging inwards over it.

There is undoubtedly a connection between the Nisuch Hamayim (pouring of water) on the Mizbe’ach — which the Gemara states brings blessing to the year’s rainfall — and the willow placed around the Mizbe’ach. There seems to be also a connection between willows growing by the waterside and the prayer for geshem, rainwater, on Shemini Atzeres, for “on the Festival (Sukkos), all are judged in regard to water” (Mishnah Rosh Hashanah 1:2). The Sifsei Chachamim says that Klal Yisrael is judged on Sukkos regarding how well they performed the mitzvos relating to water. The performance of these commandments earns the blessing of plentiful rain.


The tree itself consists of light, soft wood which is good for making light furniture and for building
boats, since the wood withstands rot. In fact, in Aramaic and Syrian, boats are called “arba,” which in
those languages means willow. The willow’s flexible branches are beautiful for weaving baskets (Bikkurim 3:8). Its bark and its leaves are pain remedies, lowering fever and healing infections. Salicyl, the active compound in aspirin, was first isolated from the bark of salix trees and is called after the tree’s scientificname.

The evergreen oleander (Nerium oleander) bush lends pink finery to the whole area of Mapal Ayit in
the summer. It has dark green, spear-shaped leaves and beautiful, fragrant, white or rose-pink, tufty
flowers. However, all of its parts are extremely poisonous — one leaf is enough to cause death. The poisonous effect of the oleander has been well known for centuries. There are records relating to its having poisoned Napoleon’s soldiers during one of their campaigns. It is said to treat dermatitis, edema, hypertension, and ringworm

Fig trees are seen among all the other greenery. In former times figs grew throughout the Land. Our 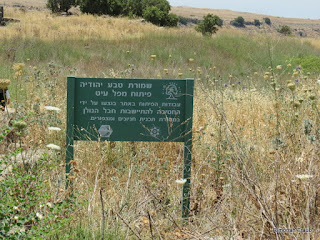 Sages praised the figs of Lod, Tzipori and the valley of Ginossar. The Torah promises us that Eretz Yisrael is a land flowing with milk and honey. Chazal witnessed the literal fulfillment of this verse when they saw burst, ripe figs dripping their honey onto the ground. A flock of goats was grazing under the fig tree and their udders were so full of milk that it leaked out and mingled with the fig honey.

The fig tree is mentioned by name in the Chumash. Its leaves were used by Adam and Chavah to sew garments for themselves after they failed the test Hashem set for them. Some say the forbidden tree
was a fig tree since its leaves were used for the purpose of correcting their sin.

Figs are one of the seven praised species of the Land. The fig tree was valued for its delicious, sweet fruit (Shoftim 9:11). The fig was also a symbol of prosperity and security. During Shlomo Hamelech’s reign, each man — from Dan in the north to Be’er Sheva in the south — lived safety, “under his own vine and fig tree,” as it was a good land, exactly as promised in Devarim 8:8-10.

Shlomo Hamelech in Mishlei (27:18) tells one to guard his fig tree. Hoshea (9:10) compares Hashem’s enthusiastic love of Klal Yisrael to a ripe fig, whereas the unripe fig mentioned in Shir Hashirim (2:13) refers to the wicked ones of the nation whose deeds are “unripe.”

Posted by Eretz Yisroel in the Lens at 12:19 PM