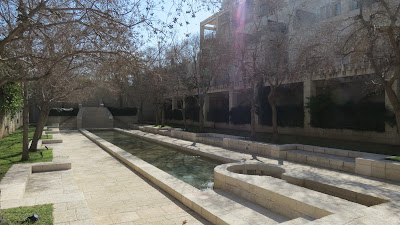 Our beautiful  is studded with many exceptional gems. The lavish David’s Village across from the Mamilla Mall is in itself an attractive neighborhood, but an unexpected surprise awaits you when you investigate the area more fully.

On Rechov Yitzhak Kariv (named after the mayor of  from 1952-1955), right after the “offloading lot” of the David Citadel Hotel, enter a small pathway. Behind the gate at the corner is an orange tree-lined pathway that will lead you to lovely fountain pool. Ask the guard to let you view this garden. 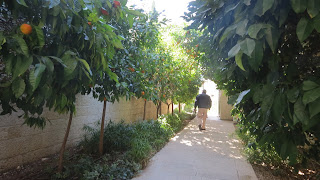 Mamilla was established in the late 19th century outside the , a little west of the Jaffa Gate. It was a mixed Jewish-Arab business district. The name Mamilla probably stems from the Arabic name meaning "that which comes from G-d." Others say the name Mamilla may be a corruption of the Hebrew word for “the filler” (m'malle).

Following the approval of the 1947 UN Partition Plan, an Arab mob ransacked and burned much of the Mamilla District and stabbed some of its Jewish occupants. During the War of Independence, the neighborhood turned into one of the main combat zones, which led to the flight of both Jewish and Arab residents. After the Armistice Agreement gave  the western three-quarters of Mamilla, and the eastern quarter became a “no man’s land” of barbed wire and concrete barricades.

Since Mamilla is located along the armistice line between the Israeli and Jordanian-held sector, throughout the 19 years of the armistice, it  was subject to stone throwing, sniper, and attacks by Arab Legionnaires from the  walls above it. After  built a barrier wall, the area became the home of new immigrants with large families and small financial abilities. It also became a center for light industry such as auto repair.

After the unification of the city in 1967, the barricades that had lined Mamilla’s 19 year-old border were torn down.  As the result of years of fighting and the resultant limited maintenance, many buildings at the eastern end of Mamilla were in shambles and several historic buildings had to be condemned. 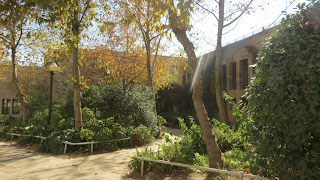 In 1972 the City began to develop the neighborhood. They evicted about 700 families, as well as communal institutions and businesses. These families were mostly Jewish immigrants from Arab states whose weak financial status left them vulnerable. For 19 years, they had suffered as a live defense barrier.

After they were evicted from their homes, there was a steep increase in real estate values in this former slum area. Although the Israeli Black Panther Movement was established in Musrara and not Mamilla, one of the key issues that caused its founding and the Israeli social upheaval of the 1970s was anger at the treatment of the Mamilla residents.

The former Mamilla area, now called David’s Village, is a luxury neighborhood. The apartments are mostly owned by people who live overseas and visit  a few times a year. That fact on the ground  makes it resemble a ghost town in the city center
Posted by Eretz Yisroel in the Lens at 9:40 PM