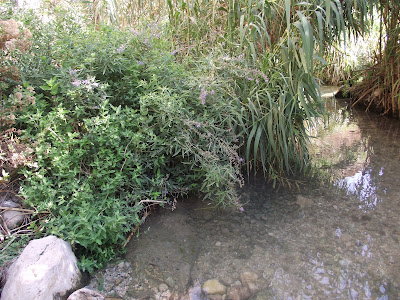 Flowing though Midbar Yehudah, the icy stream that originates from the waters of Ein Mabua (Mabua Spring) is a delight to wade through. The golden hills of the desert tower from above, enhancing this exhilarating experience. The wind sings though the tall, thick rushes on either side of the rivulet that meet to 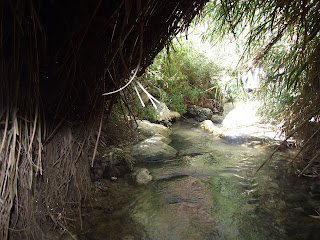 form long, shaded tunnels when they intertwine above one’s head. The sweet smell of wild-peppermint plants fills the air, as their purple blooms sway in the breeze.

In the clear water, which at some points reaches above one’s knees, tadpoles and small schools of fish swim by. One can also see many freshwater gastropods in the water, clinging to the banks of the stream. This type of black snail is a freshwater habitant and indicates that the water is fresh and safe to enter, although not to drink. 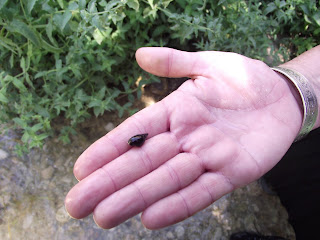 Ein Mabua, called Ein al-Fawar by the Arabs, is located about 22 kilometers east of Jerusalem (approximately 35 minutes) along Route 458, Kvish Alon or Derech Eretz Hamirdafim (the Land of Pursuits Way). This road twists and turns sharply as it travels down very steep inclines, toward the place where people park their vehicles. From this spot there is a further steep descent by foot, to reach the Mabua Spring. The spring is known as the “Ein Hameshuga,” the crazy spring, because of the way the water disappears and after a while fills back up, without any set schedule. The water originates from the rainwater in the Judean Hills. The water drips through the limestone in the ground, filling up a karst cave. When the cave is full, the water flows into the pool for about 20 minutes. At that time, the pool begins to empty out and the process repeats itself. This bubbling spring was cemented into a pool by the British. The ruined concrete house close to the pool is a pump-house they built.

The famous aqueduct that the Hasmoneans built in 180 B.C.E., and which begins near this pump-house, stretches 20 kilometers to Jericho. King Herod renovated the aqueduct and added bridges to it. He also dug out tunnels. Since the aqueduct cannot carry large quantities of water, the water flows out in a waterfall and creates a  small pool.

Caution: It must be noted that one should not travel too far down the steam (not more than 10 to 15 minutes) as it eventually reaches Jericho, which is in enemy hands. Also, one needs to hike within agroup of people.
Bring along plenty of water and sun protection — a hat and suntan lotion — plus plastic shoes so that you
can wade though the water.

To get to Ein Mabua, take Route 1 from Jerusalem toward the Dead Sea. (Leave Jerusalem though the
Derech Har Hatzofim Tunnels). Take Route 458 (Alon Road) north to Ein Mabua (Ein al-Fawar).
There is parking at the side of the road, near the entrance to the spring. Ein Mabua — Ein ‘Fawar’ 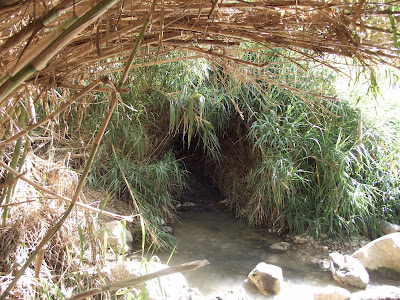 Posted by Eretz Yisroel in the Lens at 12:55 PM