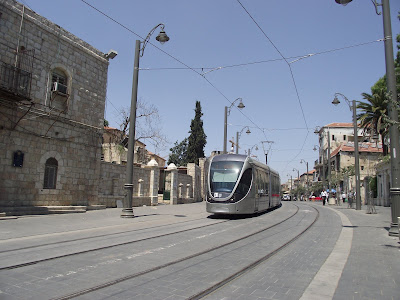 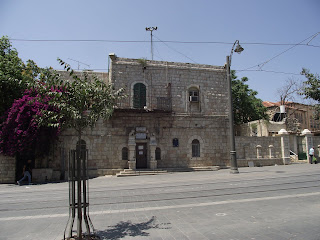 This building between the shuk and Kiach St., the local police station, was originally a small Turkish citadel at the entrance to Jerusalem. In 1863, when it became the residence of British Consul in Jerusalem, its lovely decorations were added, including carvings of stone lions.

A rebbi in the Etz Chaim cheder that used to be next door told his class of cheder yingelach that when the
lions at the police station on Rechov Yaffo near their cheder would hear music, they would get up and dance. 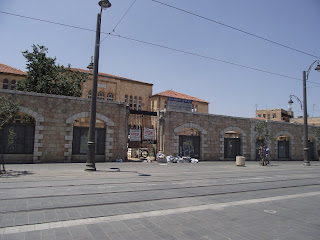 The children were very eager to see the animals perform this feat. They organized drums and some flutes and came and played them near the lions. But wonder of wonders, the stone figures continued to crouch in their usual position. The boys ran to tell the rebbi that the lions did not respond to their music. Said the rebbi, “What I told you is true. If the lions would hear music, they would dance — but being of stone, they cannot hear the tunes. So, how can they dance if they cannot hear? But you children should make sure that you use your sense of hearing to hear the words and truth of Torah so as to always be able to dance on the true Torah pathway in life.” 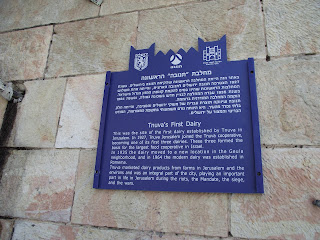 This was the site of the first dairy established by Tnuva in Jerusalem. In 1927 Tnuva Jerusalem joined the Tnuva cooperative, becoming one of its first three dairies. These formed the basis for the largest food corporation in Israel.

In 1935 the dairy moved to Geula and in 1964 it moved to Romema, then an isolated factory zone. The
Jerusalem zoo was its neighbor. Today, the dairy is in Kiryat Malachi and other large plants throughout Israel. 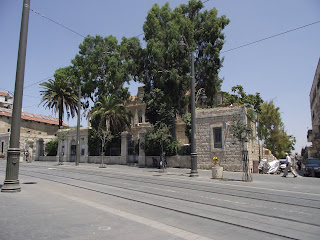 In 1882, a wealthy Christian Arab family built an elegant home for their son who was soon to wed. The groom passed away on the day of his wedding … but the family insisted on going ahead with the wedding — performing the ceremony and feasting with the corpse. Yerushalmim call the place “the House of the Dead
Groom.”

The huge, 5-meter- (16-ft-) diameter aerial sundial at No. 92 Rechov Yaffo was designed by Reb Moshe
Shapiro, a Meah She’arim watchmaker and self-taught astronomer. By studying the pertinent writings of the
Rambam and the Vilna Gaon, he taught himself the art of sundial-making, which was of crucial use to ascertain, among other things, (1) the exact time of sunrise in order to know when to begin Shacharis kevasikin, (2) the exact time of sunset to calculate when to complete Minchah, and (3) the time for lighting Shabbos candles. 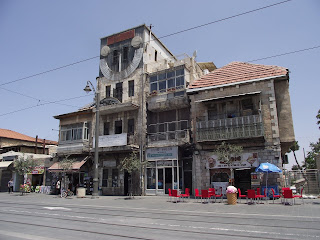 From 1908-1917 the Sundial Building was constructed in stages by Rabbi Shmuel Levy, an American tailor. The money for its construction was raised in America by selling lottery tickets for 20 francs apiece and awarding monetary prizes. Each ticket outlined Levy’s intent to build a synagogue, study hall and hostel and depicted the planned four-story building with a fifth-story gallery. The tickets also showed pictures of Yerushalayim, Chevron, Teveria and Tzfas. The tall, narrow, four-story Machane Yehudah Clock Tower building, with its fifth-story wooden gallery, was the tallest building in Jerusalem at the time it was built. The bottom floor was the Beis Hamedrash Zoharei Chamah (Sunrise Shul) for vasikin minyanim and doubled as a beis medrash called Shoneh Halachos. The Tiferet Zion v’Yerushalayim Hostel, which occupied the upper floors, could accommodate up to 50 guests.

An earthquake in 1927 caused the collapse of the fifth-floor gallery. In 1941 a fire, ignited by an electrical
short circuit, destroyed the gallery, sundial and clocks, and damaged the rest of the building.. The sundial and the façade of the building were restored and reconstructed by the Jerusalem Municipality in 1980. The Zoharei Chamah shul now has minyanim one after another, on the first and second floors. There is a “Shabbos siren” on the building’s roof that alerts people to the time of licht bentching. The sundial is still accurate to within 15 minutes.
Published in Hamodia
Posted by Eretz Yisroel in the Lens at 2:12 PM