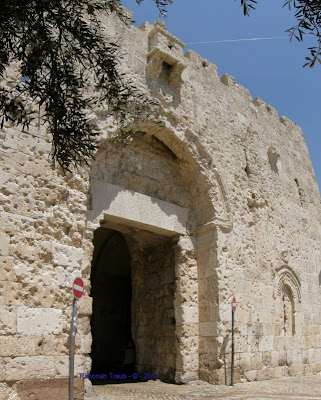 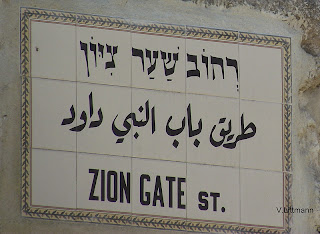 Zion Gate, Shaar Tzion in Hebrew, was built by Sultan Suleiman the Magnificent in 1540 and stands between the part of Mount Zion that is inside the walls of the Old City, and the portion of Mount Zion that was left outside the walls. Set in the southern part of the Old City wall, facing south in the direction of Chevron, the gate is an entrance to both the Armenian and the Jewish quarters. A beautiful window on each side of the gateway distinguishes it from other gates of the Old City. Infront of the gate, as one enters the city, is an attractive circular paving. 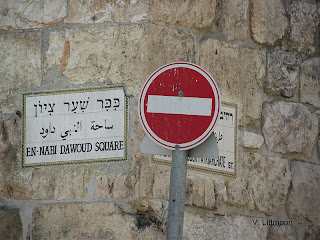 As Muslims believe that King David’s tomb is located nearby, they call this “the Gate of Prophet David.” In the Middle Ages it was called “the Gate to the Jewish Quarter.” During the 19th century, an area close to the gate was the gathering place of lepers.

The hundreds of bullet marks which pock the gate serve as mute witnesses to the 1948 War of Independence and the fact that that war’s outcome could have been radically different in regard to the Old City. Hagana forces conquered Mount Zion on the night of May 18, breaking though the Jordanian siege into the Jewish Quarter. Uzi Narkis led the fray. 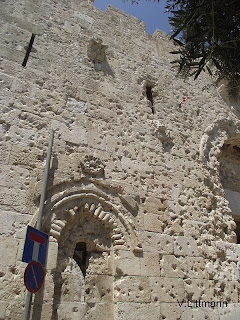 The Jewish soldiers were hiding in the vegetation near the gate, ostensibly awaiting commands, and when Narkis gave the command to enter the Old City he started running into the gate, without confirming that his orders were being followed. He was moving fast along the road in the Old City when he suddenly looked and realized he was all alone. Retracing his steps, he found that all his comrades had fallen asleep. He awakened them, and this time the whole group moved forward as one man, rather than literally just one man.

But the following night, the Hagana soldiers were withdrawn from battle. The handful of exhausted Jewish defenders who remained could not hold out against the might of the Jordanian army. On May 28, less than two weeks later, the Jewish Quarter was forced to capitulate to the Arab Legion, and the Old City fell to the Jordanians. It is felt by many that if the Hagana had not left, they could have conquered the Old City completely, as at that time the Arabs were in mortal fear of the Jews.

Before a cease-fire was drawn up, Israel made an eleventh-hour attempt to break into the Old City. About 100 meters from the gate, etched into the wall is an inscription bearing the date 18/7/1948. A 150-kilogram homemade, cone-shaped bomb was lugged, stretcher-style, up Mount Zion and set down against the wall. Although a deafening explosion was heard, the bomb made only a small dent. 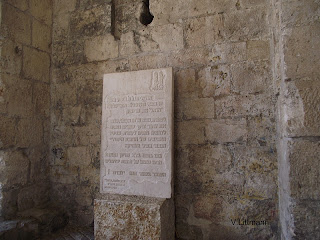 Zion Gate ended up in Jordanian hands Jerusalem was doomed to remain a divided city for the next 19. The area around it was designated a no-man’s-land and was heavily mined and under constant sniper fire. years. For the whole of those 19 years, the Jordanians kept Zion Gate closed. After the miraculous Six Day War in 1967, Israel took control of the area and cleaned up the terrible mess left behind by the Jordanian forces. Israel reopened Zion Gate, allowing full access to Jerusalem to all peoples and religions. On Zion Gate is a metal plaque in Hebrew that was put up in 1967. It reads: “The gates in the wall were broken open, the positions of the enemy were pulled down, and the city was cleared of mines by units of the Engineering Brigade — Central Command, June 1967.”

Fifteenth-century travelers recount that the key to Zion Gate was held by the Jewish community of the Old City and that a Jewish watchman was in charge of opening and closing the gate. As the last British troops left Jerusalem on May 13, 1948, the old, rusted, foot-long key was presented to Mordechai Weingarten, the last official muchtar (district head) of the Old City. 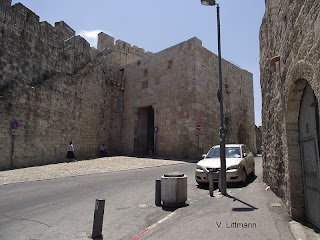 Shaar Tzion has an L-shaped internal structure. It was constructed that way in order to slow down potential invaders from entering the city with speed. Nowadays, both pedestrians and vehicles use the gate, although maneuvering is difficult due to the L-shaped passageway. Once, there was two-way vehicular traffic passing through the gate. Today, cars can exit but not enter the Old City via this gate.
Publish in Hamodia.
Posted by Eretz Yisroel in the Lens at 12:11 PM