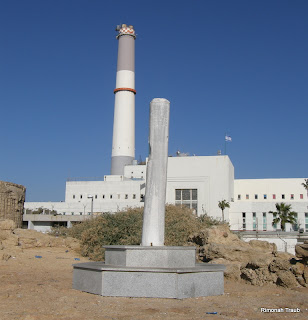 The Yarkon River is the longest river of Eretz Yisrael’s coastal plain, extending 27 kilometers from its source near Rosh Ha’ayin to its estuary, where it empties into the Mediterranean. As you walk down the end part of the Yarkon River to reach the river’s meeting place with the sea, you will view the sapphire-blue sea to your left and the Reading Power Plant to your right. Set around the pier are many benches, facing different directions to enable one to enjoy diverse views of the indigo Yarkon Stream estuary. 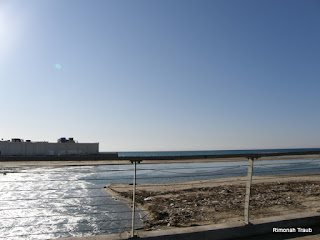 Located in the northwestern part of Tel Aviv at the mouth of the Yarkon River is the Reading Power Station. This power station supplies electrical power to the Tel Aviv District. Due to failure to comply with environmental regulations which required it to shift to natural gas instead of fuel oil as its main energy source, the station was partially shut down in early 2006. Since then the station has reopened, and is now powered exclusively by natural gas, which has significantly reduced the amount of pollution emanating from the power plant that produces about 5 percent of the Israel Electric Corporation‘s total production of electricity.

Environmental groups have continuously accused the Reading Power Station of causing severe pollution, both to the air in the Tel Aviv urban area, and to the water of the Yarkon River. In order to boost the power station’s image in the  public eye, the plant invested in the Reading Pier, an area spreading across 60 dunams and boasting an upscale boulevard and bicycle track that is also disabled-accessible. This was done so as to attract people to visit the area around the facility.

There is a 200-meter breakwater, which allows for a walk along a narrow path into the Mediterranean Sea. The whole area known as Reading Park is rich in natural coastal flora and fauna and connects the power station’s cooling pools and the Tel Baruch beach. 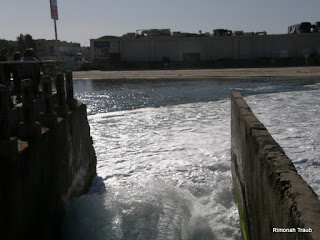 The ner halaylah (candle of the night), (Oenothera drummondii) flower (also known as evening primrose) lines the promenade. Its Hebrew name is derived from that fact that it blooms throughout the night. Each plant can have between 20 and 30 flowers open overnight, and by noon the next day they will simply have faded away, to be replaced the next night by many more blooms. Although not mentioned in Tanach, it is one of the few plants to flower in the fierce Israeli summer, tolerating the saltiness of the seashore, the aridness of the sand, and the spray of the waves. It seems that it came to Israel in the 19th century via the Americas.

The beautiful sea daffodil (Pancratium maritimum), which in Hebrew is called chavatzelet hachof, is also found here. Many believe that this plant is the chavatzelet hasharon mentioned in Shir Hashirim. As the Sharon Plain is along the coastal seashore (chof), this would fit. Sometimes it is called the sand lily; in any event its beautiful, delicate- looking flower belies its toughness, as it thrives in the arid wastelands of the seashore.

Sea birds such as the Great White Egret, hunting for fish, can also be seen in the area.

The Reading Power Plant was built in 1938 during the British Mandate, and its most familiar part is the Reading chimney. The plant is named after Daniel Rufus Isaacs, First Marquess of Reading, and a chairman of the Israel Electric Corporation. The 1930s-era architectural façade of the station has been renewed and restored it to its original condition. 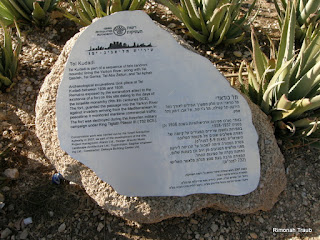 The power plant is built on the ancient Tel Kudadi (“Kudadi mound”), whose remains are found nearby. Scattered over the mound are the remnants of a stronghold from the First Temple period and other ancient buildings. As it was the nearest spot to the river that was cross-able by foot, the stronghold defended the area against invaders. Archeological excavations were carried out during the British Mandate on this mound. Unfortunately, the construction of Reading Power Plant severely
damaged the mound.

After the First World War, a memorial pillar that perpetuated in writing the crossing of the Yarkon River by the British troops [four days after Chanukah 5678 (1917)] was placed over Tel Kudadi. In 1934 a small lighthouse was built right next to it.

Around the time the power plant was built, a bridge was constructed in order to link the Yarkon peninsula to the northern bank of Yarkon River. The bridge, which connected the Reading Power 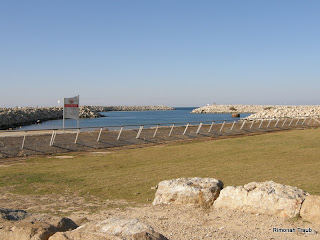 Station to the Tel Aviv Port, functioned from 1937 until the 1970s as a bridge for vehicular traffic. It is
known as Wauchope Bridge, in honor of British High Commissioner to Palestine and Transjordan
Arthur Wauchope, who served in this role between 1931 and 1938.

This bridge was demolished in the late ’90s and was reconstructed and adjusted for pedestrians and cyclists. The new bridge that sweeps over the inlet to the Reading Power Station is aesthetically designed so that it enhances the scene greatly.

While the landscaping was in process, plants that had become extinct elsewhere were newly rediscovered, as for years the area that had been sandwiched between the enormous Reading Power
Plant buildings and the sea had been left virtually undisturbed. These plants and hundreds of others were cautiously uprooted and nurtured, and were then carefully replanted in their natural habitat.

Behind the Reading Power Plant is Sdeh Dov Airport (Dov Field), which mainly handles scheduled
domestic flights to Eilat, northern Israel (Haifa and the Galilee), and the Golan Heights. In 1937, the mayor of Tel Aviv, Israel Rokach, asked the British authorities for permission to create an airport. The Arab riots of 1936-39 made Jewish ground-travel dangerous and he hoped thereby to solve the transportation problem.


Work began on a plot of land north of the Yarkon River behind Reading in 1938 and once completed, the airport offered regular flights to Haifa and Beirut. In 1940, the airport’s name was changed to Sdeh Dov, in memory of Dov Hoz. He [along with Ben Zvi] established and ran the first Israeli aviation company “Aviron”, which largely served as a front for the Hagana’s air service. 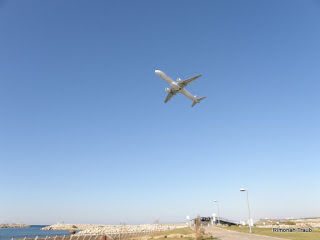 In the 1948 war, the airport served as a base to the new Israel Air Force. As the central base, it was home to 21 aircraft at the time. The first military flight was made in December 1947, when Pinchas Ben Porat flew to Beit Eshel to rescue an injured soldier. Following the 1948 war, the military started using the Sdeh Dov airport on a regular basis.

By 1960, land in Tel Aviv became scarce, and the Municipality demanded that the airport be relocated northward, so as to allow residential development in its place. Commercial international flights were then moved to Lod airport (today known as Ben Gurion Airport). It was suggested that Sdeh Dov Airport’s runway be replaced by a new one in the sea. This never came to fruition due to the high cost involved.

The early 1990s saw a rapid rise in land values in the Tel Aviv area following the massive immigration wave from the ex-Soviet Union and the rapid economic growth fueled by the peace process. This brought the issue of relocation back to light. Despite this, however, in 1997, Sdeh Dov was declared an international airport for private flights. 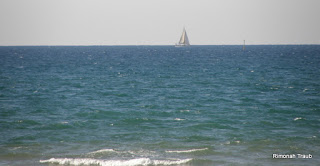 The issue remained unresolved until late 2006, when it was announced that the airport would be vacated to make way for residential redevelopment. It is unclear; however, when this will actually take place, as the Tel Aviv Municipality opposes closing the airport. Initially, the plan was to relocate the entire airport (runway as well as terminal facilities) onto an artificial island to be built offshore.

There have been plans to close down the airport, seeing as it is located in a very central part of Tel Aviv, on rather expensive land. So make sure the airport still exists if you are planning on using its
services!

Posted by Eretz Yisroel in the Lens at 1:49 PM