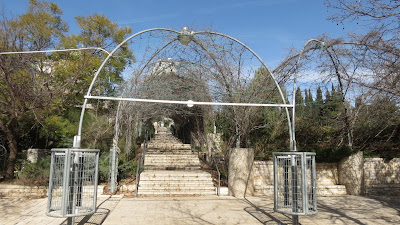 At the time of the Purim story, as in every generation, our enemies have tried to annihilate us. This week on the anniversary of their deaths, we remember the kedoshim who were killed in a suicide bus bombing nine years ago as they were passing Gan Hapaamon, the . 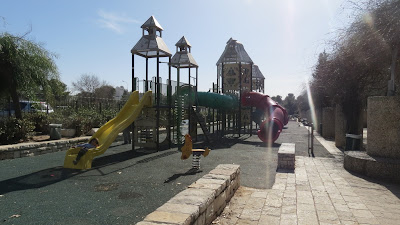 Located between Yemin Moshe neighborhood and the German Colony, at the Intersection of Keren Hayesod and King David Street, the Koret Liberty Bell Park covers about one city block (nine acres), and provides green relief in the center of Jerusalem. In the summer, a lush bright green vine-covered path runs from one end of the park to the other. However, even in winter the brown stems of now bare vines are enchanting. The inviting lawns are shaded in olive trees and the whole park gives a feeling of welcome. 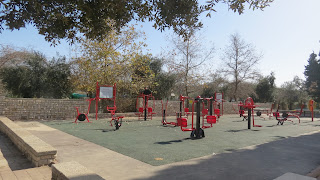 The park has a playground, as well as numerous climbing structures including a blue dragon. The sports area contains room for basketball, soccer, volleyball, ping-pong, roller skating, and other activities. There is a picnic area, a 1,000-seat amphitheater, a puppet theater, a music corner, and areas for exhibitions, folk dancing, and performances. The Train Theater, a children's puppet theater, is housed in an old railway carriage at the northern end of . A word of caution: Do check if the shows are suitable for our children. 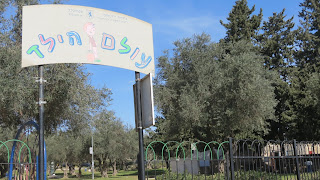 The entrance to the park is free and there is ample parking. The park main thoroughfare is wheelchair accessible and the interior pathways that in the past were too steep for the use of the disabled have been adapted for them.
In 1976, the then-Mayor, Teddy Kollek and Kollek’s Jerusalem Foundation conceived the idea of this park. They felt they needed to give a present to the  in honor of its bicentennial of the Declaration of Independence. Funds were raised in schools throughout the country and little by little, different sections of the park were inaugurated. 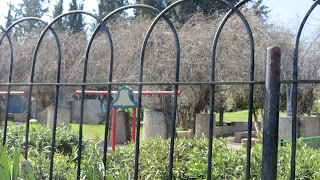 They chose to call the park Liberty Bell because this is the symbol of ’s founding. They installed a miniature of the Philadelphian liberty bell (a gift from the city of ) at the entrance to the park. As in the original bell, it’s engraved with part of the posuk from Vayikra 25:10:  "Proclaim LIBERTY (freedom) throughout all the land unto all the inhabitants thereof."

For the past few decades, HaKafot Shniot celebrations have taken place in Gan Hapaamon. In many years the park hosts the annual book fair Shavua HaSefer HaIvri, (the National Hebrew Book Week) on the grassy lawns.

Gan HaPaamon is a popular venue for Arab families and their offspring. I doubt that Jewish mothers could take their children to play in a similar park in Ramallah or any other Arab locality.
Tragically, the  was the site of a suicide bombing exactly nine years ago on February 22, 2004. On a Sunday during the morning rush hour, a Palestinian suicide bomber got on the 14A bus travelling to downtown . Hidden in his backpack was an explosive device stuffed with metal scraps to maximize casualties. 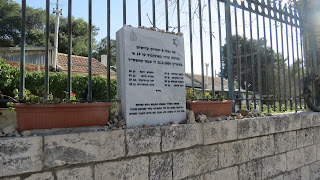 When the bus was full of people, as it passed Liberty Bell Park, the terrorist detonated the explosive device. Eight people were killed in the attack and more than 60 people were injured. Eleven of the casualties were school children.