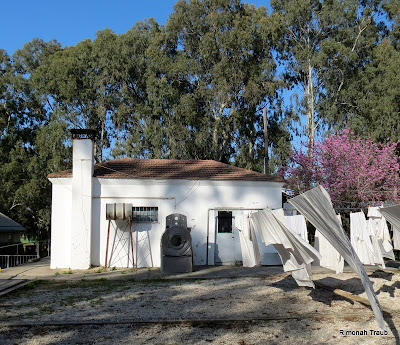 About four years ago, a group of orthodox senior citizens from Bnei Brak arrived to tour the Ayalon Institute. One woman seemed to be exceptionally moved and cried a lot. Nearly two week later, she sent a letter to the Institute explaining why. She wrote that she was a Holocaust survivor and between 1943 and 1945 she had been a forced laborer making bullets to help the Nazi cause – bullets that were used many times against Jews. After the war, she had concentrated on raising a frum generation, suppressing all the terror of those horrendous years in order to do so.
When she came to Machon Ayalon her memories overwhelmed her. It gave her great relief that Jews at Machon Ayalon had also done what she had been forced to do. The difference was they had done it willing with great self-sacrifice to help save other Jews. It seemed to be a “counter-weight” against her slavery under Nazis. She had no doubt that the efforts of the Haganah members who worked at Machon Ayalon under harsh conditions played a crucial role in the success of the War of Independence. Their altruism, with the help of Hashem, helped defend the vastly outnumbered Sherit Haplatah against the Arab armies.
became the Mandatory ruler of  in December of 1917. Despite the Belfour 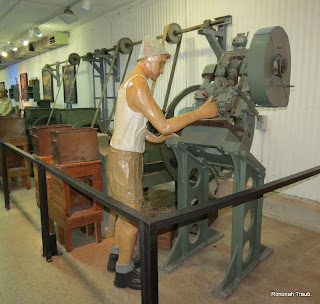 Declaration, the British discriminated against the Jews. Arab violence was overlooked and Jews were forbidden to own arms. Carrying and possessing weapons carried a death penalty. In response, Jewish underground groups were formed to defend the population of the Land and kick the British out.

During the Second World War, the Haganah, the largest of these Jewish underground movements, joined the British to fight the Nazis. Thirty thousand young Jews joined the English army, returning home after the German defeat at El Alamein, in the deserts of . Almost all of them now had a personal weapon – a British standard sub-machine gun.
At that stage, the Haganah already had underground ammunition producing factories. Their engineers had been trying to reproduce German machine guns. The trouble was that the German weaponry was very complicated. When they examined the British stand-sub-machine gun, they saw they could easily be duplicated. They started producing them by the hundreds. Now they needed bullets. 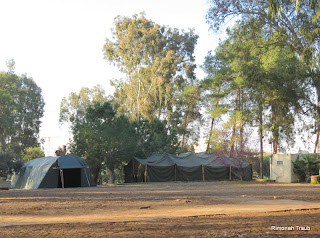 Under the theory that the best place to hide something from someone is to conceal it right under that person’s nose, the Haganah built a bullet factory on the summit of a hill near to where the English were encamped – Givat Kibbutzim located between Nes Ziona and Rechovot.
From 1932-1942 groups of young people had come to Givat Kibbutzim to train and gain experience in the ways of daily life on a kibbutz. They had then gone on to establish kibbutzim throughout the country.
In 1946 Givat Kibbutzim, code-named the Ayalon Institute, appeared to be no more than a regular kibbutz. There was a dining hall, living quarters, chicken coops, a cow barn, workshops, a laundry, a bakery, a vegetable garden and even a nursery school. Yet beneath the limestone hill was the largest bullet factory in the Land. From 1946-1948, forty-five people worked there in two shifts, manufacturing 2.25 million bullets. At the height of operations, 40,000 bullets were made daily. These nine-millimeter bullets were used in the Sten sub-machine gun, the primary personal weapon during the War of Independence. Each bullet was imprinted with the letters EA, E for Eretz Yisrael and A for Ayalon.
The kibbutz was constantly watched and often visited by British soldiers. One time, a group of soldiers came to the kibbutz and was given beer to drink. They complained that the beer was warm and fizzy. The kibbutz members apologized profusely saying that if the soldiers would give them advance notice of their visits, they would be sure the beer would be properly chilled when they arrived. The British happily agreed. Thus, each time the soldiers came to inspect the kibbutz its members knew to be prepared for them.
Not all members of the kibbutz knew about the factory. Sometimes one half of a couple would not know that his or her counterpart was involved. Those in the “dark” were referred to as “Giraffes.” That’s because a giraffe’s long neck causes its neck to be so far above the ground it is oblivious to what is going on underneath it. So too these people lacked knowledge of the secret underground activities. Only after they were considered “trustworthy” were they informed of the “bullet” operation.
The industrial unit built  below ground took three weeks (22 days) to dig out. The underground chamber has 2-foot-thick walls and ceiling.
The concealment of the factory and the tremendous noise it made was nothing less then ingenious.
Above ground on one end was a laundry room.. 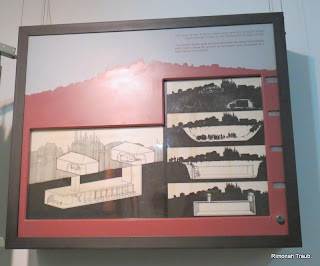 But, how much washing does one kibbutz have? To ensure there was enough laundry to keep the machine washing 24/7, a commercial laundry service was opened in Rechovot. The maternity facility in the city brought their dirty diapers to this shop. The laundry acquired for itself the name of a superb cleaner. Even British officials stationed in the area wanted their uniforms to be laundered in the kibbutz. To keep the soldiers away, the kibbutz members provided a pick up and delivery service for the enemy. The Brits never dreamed that the whole place was a cover-up that concealed a secret arms factory.
On the other side, there was a bakery. The huge 10-ton baking oven covered the shaft into which the necessary manufacturing machines had been lowered into the factory. In 1938, these twelve machines, (which had been used to make ammunition for WWI, 1914 -18), were purchased in . In 1985 when Machon Ayalon was renovated into a museum, nine of the machines were returned. Three are still being used to make bullets today. Once upon a time, they made things to last.
The raw copper needed to manufacture the bullets was obtained from a makeup factory. When the importing authorities asked the owner why he needed so much copper, he said that women in  use a lot of makeup and he needed to manufacture many kosher lipstick and powder cases to fill their needs. The explanation proved plausible especially as it was reinforced by gifts of lipstick and powder cases to British officials. Large import licenses were approved. 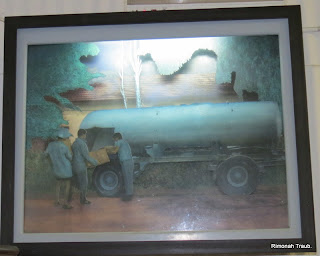 After the ammunition was produced, a way had to be found to smuggle it to the fighters. At first, the bullets were put in milk cans with a double wall. These proved too heavy. Later, secret compartments built in fuel trucks concealed them. Since the British did not expect explosive gunpowder-filled objects to be hidden in fuel trucks, the bullets could be dispersed without detection.
As the workers were underground so long, it was quickly realized that they would look suspiciously pale from being out of the sun. The doctor who was brought in suggested using a special sun lamp to tan the workers skin. They were also given extra portions of foods rich in Vitamin D.
The work was difficult. The place was dark, dusty and claustrophobic – and the penalty for engaging in such illegal activities during the Mandate period was death. To make sure they had no traces of their work on them, such as copper shavings or gunpowder, a thorough inspection of worker’s clothes, hair and shoes was made each day before they exited the factory. Many times copper shavings had to be scraped off the bottoms of their shoes.
There was also a risk of the bullets exploding and killing them (and their little children in the nursery school above ground). Yet these young people readily put their lives on the line. Before they had been conscripted to work in the bullet-factory they had been on the verge of creating a new settlement. Nevertheless, they agreed most readily to the Haganah’s plan and with meseerot nefesh produced bullets for three long years.
After the establishment of the State, the pioneer group from the Ayalon Institute decided to stay together and established a new kibbutz, Ma’agan Micha’el, by the sea near Zichron Yaakov in 1949.
The Machon Ayalon military industry factory of the pre-state days went on to become IMI (Israel Military Industries) or “TAAS”. Though Machon Ayalon ceased operation in 1948, the public only got to know of it in  1985, the factory was restored and turned into a museum.

Posted by Eretz Yisroel in the Lens at 7:29 PM