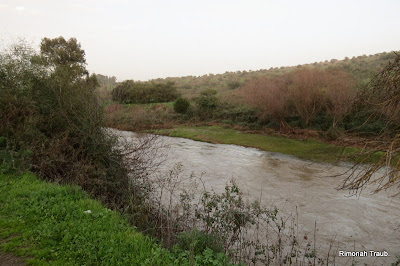 The date 10 Nissan marks 3,285 years since the Yidden crossed the . In the year 2488 Am Yisrael entered the Land under Yehoshua bin Nun. In memory of this momentous occasion, this week’s column will focus on the Yarden, the .

The different shades of greens, with their heavy, intoxicating scent, against the deep-brown earth to the one side and the flowing silver river to the other, make walking along the Yarden a heavenly experience.

Although the area is not stroller- or wheelchairfriendly, the trail in Yarden Harari (the ) along the bank of Nahar Yarden is an easy one, which even children from about the age of five or six can accomplish. One can also bike along the stream.

Deep and turbulent, with rushing and roaring waters during the rainy season, the  is reduced to a sluggish, shallow stream in the summer. However, at any time of year this path provides a vivid glimpse into the vegetation of the area. The best time to undertake the trek is at the end of winter when it’s almost spring, or during spring itself.

At this time of year, the abundance of flowers and their variety and colour range is stunning. Profuse, beautiful rakafot (cyclamens) hide under boulders and cling to the side of rocks. These fragrant, highly beloved, protected wildflowers are prolonged in their flowering season. They range in color from white to deep shockingpink, and have heart-shaped leaves.

Another protected flower — the kalanit (crown anemone) — is all over, displaying its bright red head. (When the British ruled in Palestine (1917-1948), their soldiers wore red berets and were called “kalaniot” by the local Jewish populace.)

Many types of charziot (daisies) abound in the long grass. There are yellow crown daisies and fresh and charming white daisies. Large, glossy-textured, emerald-green leaves with their dark-purple/black loof flower (arum palaestinum, of the kalla family) are dispersed all along the route.

The vulnerable flower, Ute’s ladies’ tresses — a rare species of orchid, considered to be endangered — can also be found along the river’s bank. Adding to the display is the concentration of numerous forms of thicket and undergrowth.

You may glimpse rabbits escaping from some birds of prey or leaping deer, as well as other wildlife and bird varieties. 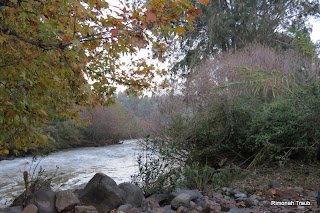 The  at Yarden Harari has a steep gradient ( in ). Considered one of the world’s most challenging rafting sections, this segment of the river is found at the end of Emek Hula as the Yarden flows toward the Kinneret.

At one point, the trail reaches a black ruin that was once a flour mill. The water of the river powered the wings of the mill to grind the flour.

The Yarden is the largest, longest, and best-known river flowing in Eretz Yisrael. Moreover, it is one of the only rivers within  that has an ongoing water flow all year round. Many of the other rivers dry up for months at a time and do not fill up until the winter.

The Yarden begins near Mount Hermon, in the tribal portion of Dan, and reaches the . Its length, as the crow flies, is about  (approx. ). Since the river meanders, though, the actual length is about  (just under ), though some measure the total length as  (), i.e., twice the straight-line distance!

The major sources of the Yarden are the  , the   and the . Flowing south through the entrance to the Great Syrian Rift Valley, the river is fed from underground sources and small streams at different points in Lebanon, Syria, Jordan and Israel.

After flowing into the Kinneret, the   flows southward into the centre of the . The existence of thermal springs, notably in the Teveria region on the western side of the Kinneret, give the ’s waters a relatively high degree of salinity.

In earlier times, the Israelites possessed the territory on both sides of the . Then, in 1922 during the British Mandate of Palestine, the British created an artificial country — the Hashemite Kingdom of  — and in 1923 the British installed Abdullah ibn Hussein as emir of the new country. Today the Jordan River forms much of the international boundary between  and the , and includes part of the Palestinian Authority.

The Yarden continues its flow into Yam Hamelach, the . This lower part of the river between the Kinneret and Yam Hamelach has many curves. The aerial distance between the two is  (), yet the flowing distance is  (). 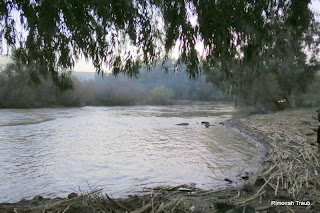 Yarden means yored (mi) Dan, descending (from) Dan. As stated, the river originates in the nachalah, portion, of Dan, and one of its three headwaters is the Nachal Dan (). In addition, the Israelite town of  in the far north is close to where the headwaters of the Yarden converge to form the river.

Since the Yarden plunges some  in its 124- mile course, (its source north of the   is  above sea level, steadily decreasing until it reaches the  423 meters/1,388 feet below sea level), its name is most fitting.

It is important to emphasize that the , despite its relatively large size in Eretz Yisrael, is actually a small river in international terms. When some European olim who were used to the great rivers in their lands of origin first saw the Yarden, they remarked how small and narrow it was. On further contemplation, they broke out in song. Why? Because, they replied, “the Yarden may not be as large and imposing as the rivers in the countries we left, but it is ours!”

The  runs not only through Eretz Yisrael but also “runs through” the Tanach, where it is mentioned about 181 times.

After the Israelites’ absence of 250 years from the Land, Yehoshua bin Nun led the Israelites across the  into the Promised Land. Just as the  had been miraculously divided for Bnei Yisrael, so too was the Yarden (Yehoshua 3:15-17). The Yarden is not so deep (at its deepest point it is around 17 feet/5 meters), and the Yidden could easily have waded through it. Its splitting was a token of love to Bnei Yisrael on Hashem’s part, and not a necessity as had been the division of the Yam Suf, where they had been in danger from the pursuing Egyptian army.

The nation woke up early that 10th of Nissan, the day of their crossing over. They believed wholeheartedly Yehoshua’s promises that nissim, miracles, would occur and they were eager to see them. Hashem had the Aron which held the Luchos transport them all to the spot on the bank of the  from where they were to cross over. The kohanim carrying the Aron walked in front of the nation.

At the exact moment the kohanim’s feet touched the water — not an instant earlier or later — the river split. As their feet made contact, the mud at the bottom of the river also split, leaving dry ground for the Jews to walk on. The river did not stop flowing but kept piling up (some say) until it was  high (higher than rain clouds), and the entire inhabited world could see it.

After the last Jew had crossed over, Yehoshua, at the command of Hashem, commanded 12 designated men (one from each tribe) to take from the riverbed , each weighing at least 40 se’ah, and carry them across. The stones were to be set up as a memorial to the crossing of the Yarden.

After reaching the other side, the Yidden looked back and saw the river start reflowing on its natural course. The Aron with the kohanim were still on the other bank of the river. The Aron then lifted the kohanim up and transported them to the other side. This showed the nation that the whole miracle of the ’s splitting was not because of the kavod of the Aron, but because of Hashem’s great love for His People.

Yehoshua had promised miracles and many occurred, including: (1) The waters split. (2) The waters afterward continued flowing. (3) After the waters returned to their natural course, the Aron lifted the kohanim and carried them across. (4) All Yisrael gathered between the staves of the Aron (Yehoshua 3:9). (5) On the day of the crossing, they travelled the astounding distance of 120 mil (to  and back). (6) All the nations who witnessed the parting were overcome with fear.

To reach Yarden Harari:
Before setting out, one should find out the state of the roads that reach the area. If it has rained, the mud can be problematic to ordinary cars and the course along the bank may be slippery.

On Route 90 turn right to Tzomet Machanayim. Pass Tzomet Gadot until you reach a sharp curve in the road. Keep watching to your right, for a sign saying “Yarden Harari,” which leads onto a dirt road. Turn onto the dirt road, and after  park your car. This is the starting point.

Walk along the black-and-white marked trail along the bank of the Yarden. When you reach the black building, turn back, using the red-and-white trail to reach your car.

Posted by Eretz Yisroel in the Lens at 2:53 PM