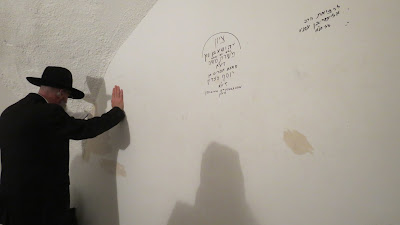 Having first davened Maariv in the yishuv of Itamar,we arrived at our meeting place with our army escort at about 11 p.m. Due to security concerns, our bus was deemed too large to enter the Palestinian where the burial site of Kever Yehoshua bin Nun is found. We were therefore shuttled in groups of about 15 to Kever Yehoshua bin Nun, situated deep within the township. There was a choice of entering Kifal Chares either by a small armored van or by army jeep-convoy. I opted for the army jeep-convoy, which is more like a “metal box” with a very high entry step.

At the end of sefer Yehoshua (24:29-30) we are told Yehoshua died at the age of one hundred ten years and was buried within his inheritance in Timnas Serach. Sefer Shoftim (2:8-9) calls the place of his burial Timnas Cheres. Both sefarim say this is north of (volcano) Chazal say the fact the mountain is not mentioned anywhere else in Tanach implies that this name should be understood homiletically. Some suggest that because the people were lax and did not eulogize Yehoshua in a manner befitting his stature, Hashem caused the mountain to almost erupt on the day of Yehoshua’s funeral. The nation’s failure to honour Yehoshua properly is somewhat surprising as the Jews were at the highest level of spirituality at the time. Some suggest that Klal Yisrael had never approved of Yehoshua’s marriage to Rachav. The truth was that Hashem had commanded Yehoshua to marry Rachav, and although they themselves were blessed with only daughters, in time eight prophets descended from their union.

Not knowing this, the nation always doubted the propriety of the marriage and showed their condemnation of it after Yehoshua’s passing. The mountain then threatened to erupt as an indication to the people that Hakadosh Baruch Hu Himself had sanctioned Yehoshua’s marriage to Rachav. From this incident, the Talmud infers that anyone who does not properly eulogize a talmid chacham deserves to be buried alive.

The Palestinian is identified by the sefer Tevuos HaAretz and others as Yehoshua’s city, Timnas Serach. He and his father Nun, as well as Calev ben Yefuneh, the other one of the meraglim that didn’t sin, are buried here. The village, in the , is located five miles south and slightly west of Shechem. Although Yehoshua himself administered the lottery of the Land and distributed property to others, he did not take a city until others gave it to him.

As mentioned in Shoftim 2:9, Yehoshua’s city, Timnas Serach, is also called Timnas Cheres. This was because the outline of a sun (cheres) appeared on Yehoshua’s gravestone. Rashi says this was so that anyone passing by would lament, “Woe that the man who made the sun stand still is now dead.” We should note that the entire conquest of the by Klal Yisrael led by Yehoshuah was utterly miraculous, all done by Hashem because Am Yisrael did not desist from learning Torah.

The Midrash tells us that when Yehoshua commanded the sun to stand still in Givon, he showed to the sun and moon sefer Devarim. He told these heavenly bodies that he never stopped learning this book. Then the constellations immediately stood still for 36 hours. Yehoshua is not to be viewed as a general who studied the Torah, but as a Torah Sage who led his people in battle. Yehoshua was given immense success as a general and ruler, in accordance with his diligence in Torah study. As the leader who led the invasion into the populous and powerful Land of Canaan, Yehoshua was commanded that the Torah should not depart from his mouth and that he should meditate on it day and night (Yehoshua 1:8). In reward for the nation’s unceasing Torah study, they were granted extraordinary aid from Heaven, which spared them most of the exertions of war. “Then you will succeed” (ibid) (as discussed in Harav Avigdor Miller’s book, Torah Nation).

There exists an alternative opinion that Timnas Cheres was the city’s real name, but that it was called Timnas Serach because before Yehoshua came to live there its fruits were as devoid of juice as earthenware (cheres), but after his arrival the abundance of juice in its fruits caused them to rot (serach) if they were kept too long. As this seems to be a flaw rather than a blessing, there are those who understand it the opposite way before Yehoshua lived there, the fruits would spoil because of their excess juice, but after he arrived they would keep indefinitely like earthenware.

Yehoshua is called the disciple of Moshe because he achieved greatness not through his own wisdom, but through faithfully following his teacher Moshe. When Moshe ascended Har Sinai, Yehoshua followed after him closely. After Moshe entered the clouds at the top of the mountain, Yehoshua remained below— all forty days and all forty nights, as a servant waiting outside for his master. During that long vigil, Hashem performed a special miracle for Yehoshua. He sent down mann to the very place where Yehoshua was waiting.

From that time on, Yehoshua became Moshe’s attendant and never ceased to serve him day and
night, as the Torah states in Shemos 33:11: “His disciple Yehoshua bin Nun never left the tent.” He would sweep the lecture room, arrange the benches, and prepare a seat for Moshe. Then he would help Moshe sit down, facing him like a servant who sits facing his master. He crafted himself into the vessel that was capable of receiving Moshe’s authority. For doing this he was rewarded with the crown of Torah. Yehoshua’s reward is stated in the mishnah in Avos: he is the one to transmit Torah from Moshe to the next generation.

One of the best-known statements about Yehoshua is the one made by his contemporaries — the zekeinim, who knew both Moshe and Yehoshua — “The face of Moshe was like the face of sun, and the face of Yehoshua is like of the face of the moon.” On the surface, the comparison seems most unflattering to Yehoshua. The Sfas Emes points out Moshe’s essence was so lustrous that his face always shone and he had to put on a mask when he was with people. Yet Yehoshua managed with his diligence in serving Moshe to become his greatest student. Yehoshua was the only one in that generation who was the reflection of Moshe Rabbeinu, the one capable of receiving Moshe’s brilliant, blinding spiritual light and reflecting it to Klal Yisrael. He was therefore chosen as Moshe’s successor.

At first Yehoshua was called Hoshea. Moshe added the letter yud to his name when dispatching him as one of the spies sent to survey Eretz Yisrael. The intention was that his name should begin with yud and then hei, one of the names of Hashem; thereby Moshe implied “May Hashem save you from the scheme of the spies” (Rashi).

Posted by Eretz Yisroel in the Lens at 8:18 AM