Yericho and the Hakafos That Felled Its Walls© 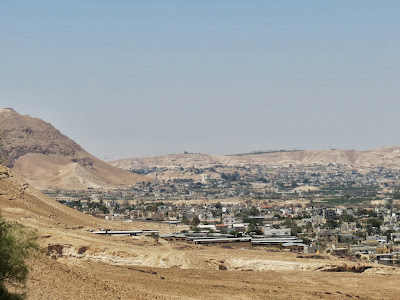 Nearly four decades ago I went with my seminary on a tiyul with tour guide Rabbi Pesach Levi to Yericho (). Yes, you read correctly: Yericho. Back then, it was not like it is today, deadly dangerous. Times were different: it was right after the Six Day War, and the Arabs were still in mortal fear of us. Rabbi Levi showed us the place thought to be the spring of Elisha, where the prophet sweetened the water (Melachim II: 20-22).

Yericho’s constant sunshine, rich soil, and abundant water supply from the nearby springs have always made it an attractive place for settlement; the city is believed to be one of the oldest cities in the world. In fact, a set of stairs, which are said to be the oldest in the world, were found here!
Layers of 23 ancient civilizations have been uncovered in Yericho. Besides being ancient, Yericho is also one of the lowest cities in the world, about () below sea level. The city is located between in the east, the to the west, and the to the south.

Yericho benefits from natural irrigation afforded by the Jordan River approximately four miles to its west, and from underground tributaries from the which water its oasis. The average temperature is 59oF(15oC) in January and 88o F (31oC) in August. These natural sources of irrigation and heat result in teeming plant life and transform Yericho into a lush, green area amidst an otherwise barren desert.

When Yehoshua bin Nun entered Eretz Yisrael with Klal Yisrael he did so close to Yericho, as it was the key to the whole of the and needed to be conquered first. When Yehoshua sent his two spies, he instructed them to “look at the Land and Yericho.” But was Yericho not part of the Land? In answer, Yericho was so important that it was considered equal to the whole Land.

It was the most heavily fortified city in . All the Canaani kings had sent their choicest troops to protect it. If the spies saw that in this well-guarded metropolis people were afraid, it indicated that the entire country’s population was in extreme fear.

The entire land, except for Yericho, was subjugated by battles. The way Yericho was subdued made it apparent to all that Hashem was fights Am Yisrael’s wars. The passuk says that Yericho was “sagur u’mesugar,” which roughly means double locked. The city was surrounded by seven walls, each one as thick as it was tall. The iron gates, with their copper locks, were intentionally not aligned. Magic spells were spun to stop all from entering, and demons could be summoned against any would-be intruder, to protect the residents of the city.

Am Yisrael walked around the city — with the Holy Ark — once a day for six days, and on the seventh they circled it seven times, which totalled 13 times of encircling the city. This was corresponding to the 13 principles of our faith or to the numerical value (13) of the word “echad” (showing the oneness of Hashem).

The first march was on Sunday, while the last was on Shabbos, dignifying the conquest of Yericho with the holiness of that day. On this final day, after the Jews blew their shofaros, the walls of Yericho sank into the ground (Yehoshua 6).

Why was this city the key to Eretz Yisrael? At that time all 70 sarim (guardian angels) of all the world’s nations were in the Land. We know this from the fact that Achan took the cloak of the king of Bavel from the city. Rashi is troubled by this: How was this garment in Yericho when Bavel was not one of the seven Canaani nations?

Rashi answers that before the conquest of the Land, each of the world’s kings (all 70 of them) had a palace in Eretz Yisrael. Meaning, each of the sarim had influence in the Land. Therefore, all the powers of impurity were “ruling” in the Land. The conquest by Klal Yisrael of Eretz Yisrael meant freeing the country from these powers of tumah. When the meraglim that Moshe sent had said “they are stronger than we are,” they were referring to the sarim (powers of tumah) and not to the people occupying the Land.

The reason that all the powers of tumah could occupy the country was because of the country’s great potential. “This against this,” say Chazal. The Land is intended for Am Yisrael, who encompasses all the 70 good qualities of goodness and kedushah. Until that point in time, Am Yisrael with all its kedushah was absent and the Land therefore filled up with the powers of tumah.

In addition to their sway in places all over the country, all these 70 sarim each had a hold in Yericho, making Yericho the key to the entire Land. The capture of Yericho meant Am Yisrael had defeated all 70 of the sarim. Once all 70 sarim were vanquished in Yericho, then all the sarim throughout the Land were subjugated and their power voided. Now it was only a matter of time until the entire Land would belong to Am Yisrael.

One of the differences between kedushah and tumah is that each drop of kedushah is perpetual and has existence of its own. Tumah, on the other hand, has existence only if it is connected to all other tumah. If one can isolate some tumah from its counterparts, it will fall.

This was the strategy Klal Yisrael used by encircling Yericho. By so doing they were creating a wall of kedushah. Once this barrier was in place and the tumah inside the city was cut off from other tumah, the inner tumah lost its power and existence.

How was the wall of kedushah built? The kohanim with the Aron kodesh went first, and after them the nation. This signified the nation was taking on themselves the yoke of Torah; both the written (symbolized by ) and Oral Law (symbolized by kohanim whom they guarantee to listen to). They pledged to conduct their life “kodesh LeHashem.” On the last day, Shabbos, they completed the seven encirclements and blew the shofar. This constituted accepting the Malchus of Hashem on themselves. Their deeds of circling the wall and shofar-blowing completely nullified the tumah inside the walls, and as a result the physical walls fell.

On Sukkos too, we encircle the bimah once each day and seven times on Shemini Atzeres and seven times on Simchas Torah. In Tishrei, the seventh month, we build our personal connection to Hakadosh Baruch Hu. With the advent of Rosh Hashanah we find ourselves in heichalo shel Melech (palace of the King), for two days. Here we accept on ourselves the yoke of Hashem‘s Kingship. We discover we are royalty. Then Yom Kippur, the mikveh of purity, arrives to wash us clean of our sins. This enables us to enter Sukkos in absolute purity.

In the sukkah we are now in the Hands of Hakadosh Baruch Hu — in His shade, “tzilo dimheimnusa.” We would like to remain here all year. But the days pass and we must leave. Therefore, on Simchas Torah we encircle ourselves with a wall of kedushah as we circle the bimah with the sefer Torah.

In essence, we are doing the same act that Am Yisrael did when they circled Yericho. However, the end-goal is diametrically opposite to theirs. Their intent was to nullify the tumah inside the walls. Ours is to hold in and preserve the kedushah we attained during the Yamim Nora’im.

Posted by Eretz Yisroel in the Lens at 5:25 PM

Labels: Yericho and the Hakafos That Felled Its Walls