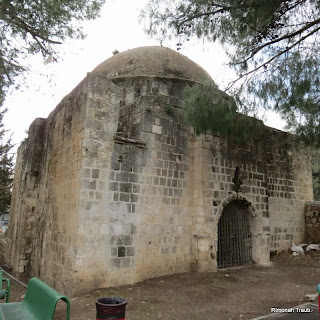 The Beit HaPecha (the Pasha’s Villa) — located between and , at 61 , was formerly a superb building. Built by the Greek Orthodox Church, it was rented out to the Turkish governors of . During receptions, the Turkish military orchestra played music in the magnificent garden. Later, a wealthy Jewish merchant, Menachem Banin from , bought the building. Today, though, it is hard to imagine how this dilapidated structure could have been a governor’s mansion for 15 successive Ottoman governors of .

At , the house of Yoseph Navon Bey features an impressive combination of Eastern and Western architecture. Built in the shape of a pyramid, the villa ascends from a long first-story level to a shorter second floor and a gabled roof having a tiny rounded window and turrets. It was surrounded by impressive gardens with flowerbeds, fruit trees and woodlands. There was even a stable and carriage house at the back.

In the basement were batteries for creating lighting in the house. This was about 20 years before electricity was common in Eretz Yisrael. This once magnificent 19th century construction is now accessed from a scruffy parking lot. In 1917, the Navon family left the building. It has since changed hands many times. At one time, in the 1990s, it was even a stylish English tea room. But today, even the water barrels on the roof of this once-opulent construction are rusted

Yoseph Navon (1858–1934), whom the Turks honoured with the title “bey” (a title of respect for Turkish dignitaries), and his family were the first to inhabit this mansion. Navon was an entrepreneur who initiated ’s first railroad, which began running from to in 1892.

Yoseph Navon the son Rabbi Eliayhu Navon was born in . In 1878, the younger Navon and his uncle, Haim Amzallag, helped purchase the land for the construction of Petach Tikva; several years later they bought Rishon LeTzion. They also built homes for new immigrants and the poor in . In 1887, together with Johannes Frutiger and Shalom Konstrum, Navon helped establish the neighbourhood of Machaneh Yehudah, which had 162 houses. The neighborhood was named after Navon’s brother, Yehudah.

Yoseph Navon had a number of other plans in mind: a new port in , electricity- and water-supply projects in , and so on. He even had an official firmah (permission in writing from Turkish government) for some of his projects. However, as he was missing financial resources, he set out for to collect funds. In 1901, he met with Herzl, who was not impressed with Navon’s plans for development in and discouraged him. Navon then stopped his activity in the region. He later died in .

Rechov Raoul Wallenberg was opened in 1984. It was named after the Swedish diplomat Raoul Wallenberg, one of the greatest heroes of the 20th century who, during the Nazi hell, implemented one of the most remarkable life-saving efforts recorded in history.

Stationed at the Swedish Embassy in during World War II, Wallenberg distributed Swedish certificates of protection to Jews and opened neutral homes flying the Swedish flag, to harbor Jews. By so doing, he managed to save nearly 30,000 people. He even pulled Jews off trains who were slated for deportation. He succeeded in saving 500 Jews already on a death march. Of the 120,000 who survived the Nazi extermination in Hungry, Wallenberg is credited with having saved 100,000! His dedication, boldness, and courage earned him a very special place among the “Righteous Gentiles.”

There is an observation plaza bearing his name, on the Jerusalem Trail near Har Herzl. In 1982, the State of Israel issued a special stamp in recognition of the tens of thousands of Jewish lives he saved.

If you turn into from and then right, into the first little lane — — and then go up a ramp on the left, you will find yourself in a tiny park that is about eight years old and has playground facilities for children. 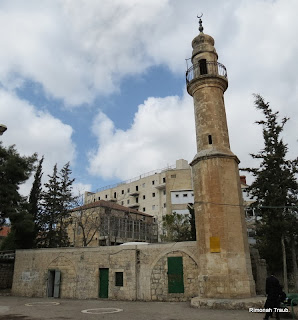 Dominating this small area is a Muslim tower of prayer — Nebi Akasha. Behind some trees is another Muslim building with a dome, called Turbat Kameria. The Arabic word turbat means a burial place of respected people. This is a typical turbat, being a square-shaped structure with a domed roof. It was apparently built under the Ayyubid dynasty in the 12th century.

In this structure (according to one Muslim tradition), members of a prominent Muslim family who were killed battling Crusaders in Saladin’s army were buried. The area is now used by the to store gardening supplies. A different Muslim tradition designates the site as the place where Akasha, one of the disciples and friends of Muhammad, was buried.

Of significance is the fact that when olei regel approached Yerushalayim, this was the first high spot from which they could view Har Habayis. It is claimed to be the highest place in . Baruch Nachshon has a beautiful painting showing a view, through two olive trees, from this mount all the way to Har Habayis, as the scene would have appeared before the surrounding areas were built up.

Indeed, older residents recount that before the view was obstructed, Yidden came here during Chol Hamoed. They then climbed on the roofs of the Muslim structures and recited the part from Mussaf, saying “But because of our sins we have been exiled from our Land …”

Mekubalim refer to this spot as pischa d’karta (opening to the city). According to kabbalistic calculations, Moshiach ben Yosef will arrive from here. Mekubalim among the students of the Vilna Gaon used to hold prayer sessions here called “Tzafnat Panayach” and “Od Yosef Chai,” in order to hasten the Geulah. Particularly on Leil Shabbos, they held prayers in this place to be mekarev the Geulah. There used to be fulltime learning of “sod” at this site.

At first, they rented the plot from the Arab who owned it and they set up a tent. Then about 120 years ago, the inhabitants of were elated when they managed to purchase the area. A very large tent was pitched, called “Ohel Moshiach ben Yosef.” This tent stood for 70 years.

During the World War II, mekubalim came to daven here that Eretz Yisrael should be spared from the army of the German General Rommel. As soon as they completed the tefillah, a message came that Rommel had been vanquished at . It is also said that the mekubal Harav Yitzhak Kadouri prayed here during the Gulf War in 1991, with similarresults.
Old Jerusalemites claimed that tumah emanated from the black Turbat Kameria building and that therefore the Histadrut building (with all that it stood for in the 1950s and ’60s, plus its weekly Friday-night soccer game with its resultant chillul Shabbos) could be close by. Also in proximity were the B’nai Brith Library plus all the monasteries and Christian houses of worship on and . These old-time Yerushalmim said the dirt on Yaffo
Street was also influenced by the turbat.

On the other side were the theatre house and apikorsis schools. Today, with thanks and praise to Hashem, most of these places have had a change of face and some have disappeared completely.

The area of the park, once very overgrown with tangled vegetation, would attract unpleasant characters who used to frequent it at night. However, today it has been cleaned up and paved,
and it is an area where frum children play.

Exiting the park from the other side will bring you to , opposite the store Bazaar
Strauss. The three-story building next to the shop extends to reach the corner of (at No. 70). The Israel Center was once located in this building which had formerly been the San Remo, Jerusalem’s foremost hotel, erected in 1927. Its architectural style is slightly more modern
European — more square than rounded
Posted by Eretz Yisroel in the Lens at 6:52 PM