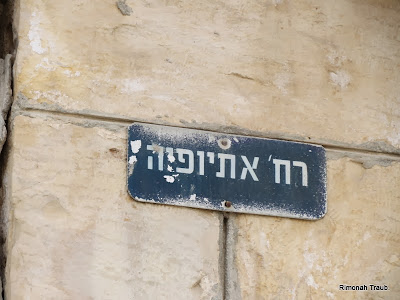 Each home on Rechov B’nai B’rith and Rechov Ethiopia is magnificent, with luxuriant gardens. At the turn of the 20th century, the Ethiopian royal family bought part of this land. The built in this area, and one of the houses served as a mansion foran Ethiopian princess. 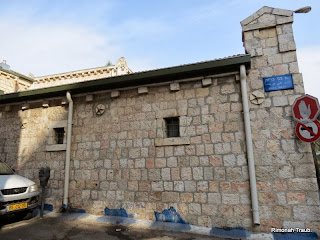 Similarly, the Nashashibis Arabfamily built a number of houses on that possess large rooms, stylized windows with coloured glass, and elaborate, high wooden ceilings. Mid-19th century and into the beginning of the 20th century, both streets became the fashionable place for
the maskilim of to live. For instance, residents included Gad Frumkin (1887-1960), one of the first trained attorneys in and a member of the Supreme Court during the British Mandate, and Eliezer Ben Yehudah (1858-1922), reviver of modern Hebrew.

Originally Rechov was called Rechov Chabash, but as this name denotes slavery, the name was switched to Rechov . In 1936 during the Second Italo-Ethiopian War, (also referred to as the Second Italo-Abyssinian War), Italian forces finally completed the takeover of , forcing Emperor Haile Selassie into exile. He and the Empress sought refuge in . Dressed in a light beige suit, always the perfect gentleman, Emperor Haile tipped his white safari-hat to whomever he met as he strolled through the streets of the . During the Second World War the Italians were vanquished and the Emperor and Empress returned home.

Due to the fact that in the 1970s, the faculties of Law, Humanities and Social Science returned to , departmental libraries opened on that campus and accordingly the number of visitors to the Givat Ram library dropped. In the 1990s, the building suffered from maintenance problems such as rainwater leaks and insect infestation.

In 2007, the library was officially recognized as the Sifriah Leumit (The National Library of the State of Israel). In 2011, the library went online, granting the public access to books, periodicals, maps, photos, and music from its collections.

Chazal say that before the coming of Moshiach, there will be a great expansion of Torah books printed and available to Klal Yisrael. Forty percent of all the books that come into the Jewish National Library are sifrei kodesh or have some connection to the religious world. This is the world’s largest collection of Judaic books, all available for Klal Yisrael.

A note of interest: one of the research rooms has been closed due to lack of use, as a large proportion of those doing research or seeking information have shifted to online searches. 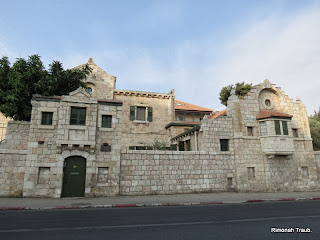 A landmark building on Rechov Hanevi’im, corner of Rechov B’nai B’rith, is the picturesque Tabor House (#58) built by Conrad Schick in 1882. The home has two inner courts with lush foliage and a tasteful water fountain. In 1951 this elaborate edifice with its turret and thick stone walls, was purchased by the “Swedish Protestant Society” that runs the Theological Seminary
for studies of the there. Conrad Schick was a German Protestant missionary who arrived in in 1846. Schick was an expert drafter, painter, watchmaker and carpenter, who taught himself architectural design and archaeology. His specialty was building detailed models of both and of the , which were a big hit among wealthy Jerusalemites. Indeed, the exorbitant fee of 800 gold coins that he received for one of his models enabled him to construct for his family the Beit Tabor, an imaginative combination of Eastern and European architecture.

Displayed above the gate of the home is its name “Tabor” and the source in Tehillim (89:13) from which the house’s name was taken: “The north and the south — You created them, Tabor and Hermon sing joyously in Your Name.”

Palm leaves and the carved Greek letters alpha and omega adorn the facade, as do the initials of Schick’s wife and his own name. Schick lived in the house until his death in 1901. Conrad Schick also designed several other buildings on Rechov Hanevi’im. In addition, he was chosen to design Meah She’arim and Bukharim.

The Mishkan Hare’iyah, on the corners of Rechov Hanevi’im, Rechov Munbaz and Rechov Chavatzelet (21), now has a glass elevator and beautiful, verdant, artificial lawns. It had been the first domicile of Beit Chinuch Ivrim (School for the Blind), which was opened here in 1902 by Avraham Moshe Luntz, one of the first scholars of studies of Eretz Yisrael in modern times. 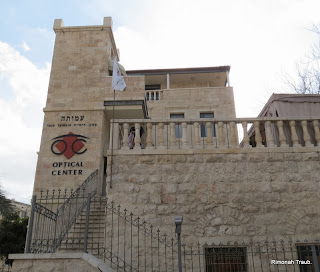 Born in Kovno, he made aliyah with his family in 1869 and settled in . At the age of 25 (1879), he became completely blind. Despite his limitations, he continued undeterred with his research, and he published his Lu’ach Eretz Yisrael yearly, from 1895-1915. He ran a printing press, publishing many works that were hard to attain at the time.

After Beit Chinuch Ivrim moved to Givat Shaul, this building remained empty and forlorn
for many years. Eventually it was transformed into the largest visual center (1,020 sq.m.) in : The Foundation Optical Centre “Museum Association of Vision.” The centre offers glasses to people in financial difficulty, dispensing hundreds of pairs of glasses daily.

Optometrists work there Sunday through Thursday from .m. to 7 p.m. to give the best treatment and rehabilitation of low-vision problems. Without making an appointment, any individual can come for a comprehensive vision examination, but it is best to phone — (02) 624-3757 — to find out what papers you need to bring and whether you are eligible
for the discounted fee.

Children from ages 6 to 20 and adults over 60 who live in , Binyamin, Gush Etzion, Kiryat Arba, Beit Shemesh or Maale Adumim can apply, but need to meet the centre’s criteria in order to receive glasses for a minimal fee. Each applicant is entitled to choose from one of the 2,000 frames shown. Ninety percent of the glasses are completed within an hour.

The first Audiology Institute centre in andthe is also found in this building.
Posted by Eretz Yisroel in the Lens at 8:22 AM