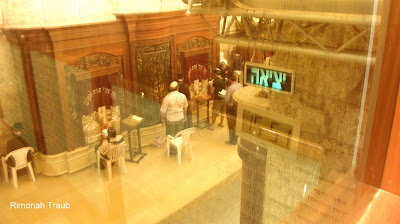 By Vardah LIttmann
You come to daven at the Kosel. Maybe its raining cats and dogs, and you are soaked to the bone, your tears mingling with the rain. Or let’s try a different scenario. It’s a broiling summer’s day, and you are finding it very difficult to stand outside with the sun beating on your head. You need to take cover.
Do not despair. Right close by is the answer to your problem. To the left side of the men’s section, beneath the Wilson Arch, within the underground vaults and arches of the Kosel tunnels is a synagogue.
This shul even has a women’s section which you enter through a room that was built at the end of the Middle Ages, and he British explorer Charles Warren called it "The Donkey Stable”.  From here enter “The Secret Passage.” 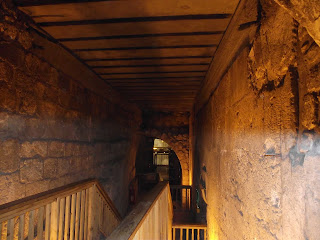 The Secret Passage is named from a fanciful medieval legend which claims that Dovid HaMelech used this underground walkway to travel unseen from his palace to the . The citadel that the myth claims as Dovid’s palace is actually a Crusader castle.  The Arabs built the vaults system you are walking through in the later part of the 12th century C.E., in order to raise the level of the city to allow Muslims direct entry to the . The vaults were then sealed in order to create water cisterns. Looking upward you see a huge arch with openings in the stonework so those dwelling above could lower vessels into a water supply directly under their houses. 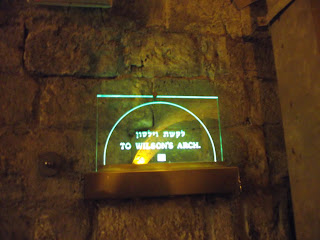 An ancient arch that spanned 42 feet and supported a road (bridge) that ran 75 feet above the Herodian pavement and Tyropoeon valley below, is today called Wilson’s Arch, after Charles Wilson who was nineteenth century explorer of Jerusalem. The road at the top of ’s Arch gave access to a gate which was level with the during Herodian times.

The surviving top of this arch is supported by the Western Wall. It is believed that the Wilson Arch was the beginning of a series of arches that moved westward. A number of subsequent arches have been discovered in recent years. 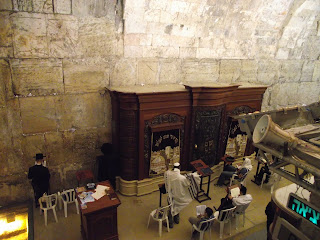 In 2005, the Western Wall Heritage Foundation initiated a major three year renovation effort. The arch was strengthened so that people could come and pray in that area. An aron kodesh was built that can house over one hundred Torah scrolls, as well as a library and installation of heating and air conditioning. In 2006 there were dedication ceremonies for the men’s section and the women’s gallery.
On July 25, 2010, an oil-burning Ner Tamid was installed within the Wilson Arch Shul. This is the first eternal light in the area of the Kosel. For many years, requests had been made that an olive oil lamp be placed in the prayer hall of the . As in the minhag forJewish synagogues, the ner tamid represents the menorah, as well as the continuously burning fire on the altar of burnt offerings in the Temple, and Ner Tamid at the Wilson Arch Synagagoe is the closest place today, place to where they used to stand.
May we soon merit that both the menorah and the korbonas be reinstated with the coming of the geula.
Published in the "English Update" 4 August 2011
Posted by Eretz Yisroel in the Lens at 5:05 PM