The Hall of Mikvahs in the Kotel Tunnels© 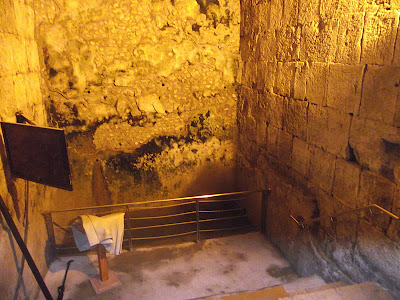 The Islamic world has been denying that there was a Beis HaMigdash on Har haBayis, but the existence of literally hundreds of mikvahs in the area disprove their vile allegations
When our were in existence, laws connected with ritual purity were scrupulously practiced. To ensure their purity, millions of olei regel would  immerse n a mikvah on erev chag. Some did so as a stringency, while others needed to immerse halachically since they were going into the azarah to sacrifice a korban, and it is forbidden to enter the azarah and perform an avodah without toiveling.
Many others needed to toivel because of different laws of tumah and taharah, which are not in effect today, e.g.a zav or zava or others who had had bodily discharges, or those who had come in contact with a sharetz, one of the eight species of creeping creatures which transmit tumah (Mishnayos Pesachim 8:5).
It takes at least ten seconds to toivel. Go down into the mikvah, submerge, straighten up, and come out of the mikvah. Multiply this by the millions toveling, and you have the reason that hundreds of mikvahs were needed in to accommodate the pilgrims.
In the digs of the Southern Wall Excavations and Kosel Tunnels, hundreds of mikvahs were found bearing witness to the devotion of Klal Yisrael and their fulfillment of halacha.
The numerous mikvahs in the area of the have two sets of steps with a stone barrier between them. The reason for the stone barrier is so that those who were tahor, after toviling in the mikvah and were leaving should not be defiled by those descending to be purified who were still tamay.
Under the Wilson Arch, you can look through a glass window downwards into a mikvah 12 meters below. 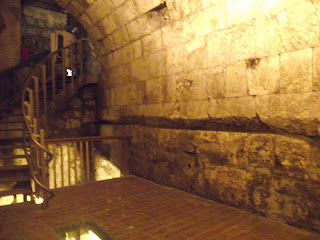 In the vaults and arches of the Kosel Tunnels adjacent to the Hasmonean’s Room is the Hall of Mikvahs. Here are found three mikvahs from the Period. One of them with large Herodian steps, is used nowadays by many chasanim to toivel on their wedding day. In the middle of the hall is a keilim mikvah whose water source starts in Ir David and runs under the .
I heard from Rav Refoel Auerbach that when Rav Shlomo Zalman Auerbach, zatzal, first encountered disposable dishes, he was ecstatic. When asked why he was so happy about them, he said that these throw-away plates and utensils are proof that the Geula is very close.
Then he went on to explain that in our times we use, at most, six sets of dishes: chamatzdik meaty, milky and parve dishes, in addition to pesachdik meaty, milky and parve. But when the Moshiach arrives and the Beis HaMikdash will be built in all its magnificence, then all the laws of tumah and taharah will take effect. Then we will need many more sets of dishes in order to keep these laws. So now HaShem is supplying us with disposables so we will have what to use until we learn all the pertinent halachos and are able to acquire all the sets of keilim we will then need.
Published in the "English Update"
Posted by Eretz Yisroel in the Lens at 1:18 PM

Labels: The Hall of Mikvahs in the Kotel Tunnels