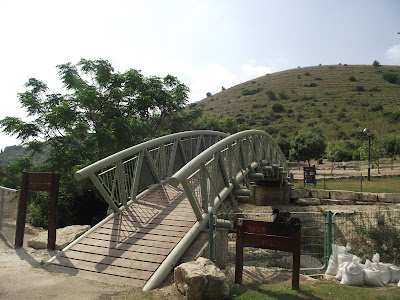 On your way up north, a glorious place to stop over and picnic is Yokne’am’s . The truth is that this spacious, grassy park—with its overpowering smell of honeysuckle mingling with thyme, and numerous enchanting, fluttering yellow butterflies — is a destination in its own right and a great place to come spend the day.

Established in 2003 and situated at the southern edge of Yokne’am, along Nachal Keret at the foot of , the park encompasses 26 dunams. Landscape architects Tzipi and Ariel Tibi created a little paradise, retaining the natural vegetation of the area and combining it with a landscaped garden.

Leaving the wadi’s channel and the plants on its banks as they were, lawns and trees were planted according the natural countryside the respect it deserved. The landscaped part of the park is shaped in circles. There are five round, closed-circuit ornamental pools whose water flows into each other. The lawns are round and edged with round, white rocks. Even the benches that are placed in strategic places on the lawns are rounded. The round recreation area contains a playground adjacent to carob trees. Beautiful weeping willows also fit into the circle motive, and only the silver poplars and oak trees ascend skyward.

In order to enable visitors to cross from one side of the wadi to the other without harming the plants or animals, two rounded wooden bridges and a set of wooden steps were built. The wadi that is in the center of the park is actually straight and linear. Reeds, raspberries and castor-oil plants (kikayon) grow along its banks. However, the kikayon (which is mentioned in sefer Yonah) is most unwelcome in this park, as it is wild and invasive. Workers are constantly uprooting it.

Near the pools are places where it is easy to slip into the water — although you must keep an eye on the children. Swimming is forbidden at the park. There is a 2,500-meter walking path that begins at the entrance to the park.

On the southwest side of the park, a little petting zoo delights children. Many kinds of parrots including 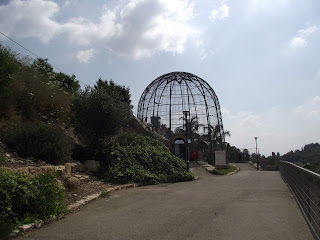 a keplus (which looks like a colourful duck), are found here. The aquariums and tanks built into the wall are full of various types of insects, reptiles and fish. Adjacent to the petting zoo is another animal-petting area, which contains rabbits and goats. Both cages are now undergoing renovation.

How to get to by car: Traveling north on Route 6, enter Yokne’am and get to There is plenty of parking on near the park.

How to get to
Traveling up north by car: on the (Kvish 6), enter Yokne’am Ilit to your right. Continue until you reach a roundabout (traffic circle), where you turn right. Keep going until you get to signpost which welcomes you to Yokne’am Ilit, and then turn left. Keep going straight, passing three roundabouts, and at the fourth roundabout you will see on Sderot Rabin.

One can take a bus (960 from ’s central bus station, 826 from Tel Aviv) to Yokne’am Ilit Terminal opposite the “G” Mall, from which the is only a few bus stops away. Bear in mind that it’s a steep upward trek to get there, so either flag down a taxi or take an Omni Express bus to reach it.

Yokne’am Ilit is only 20 minutes from the Binyamina train station, so you may want to travel by railway.

Yokne’am Ilit, which started out as a Canaanite royal town, has today developed into an Israeli high-tech city. Its proximity (21 kilometers/13 miles) from and its Technion has fostered its growth. The city is  located in a hilly region of the lower , overlooking the Jezre’el Valley

Tel Yokne’am stands on a steep hill in the northeast side of Yokne’am. This was a mighty city in Biblical times and, due to its strategic location, played an important role in the ancient history of the region. The tel itself is now in ruins, and the agricultural village of
Yokne’am (established in 1935) is built to its east. The modern city of that was established in 1967, is built south of the site.

After the 1948 War of Independence, it was settled as a transit camp (maabarah) mainly by Jewish immigrants from .

is the “happening” spot in the city for the Sephardic festival Mimouna (after Pesach), and the Municipality sets up a stage and brings in performers to entertain the large crowds.

A “National Priority Area A,” Yokne’am Ilit is under the Law for the Encouragement of Capital Investment. In Yokne’am Ilit, approved enterprises enjoy the highest level of tax benefits and investment grants. In addition, companies relocating to the region can apply for concessions in local taxes over a three-year period from the Yokne’am Ilit Local Authority.

In 1974, Osem established a plant in Yokne’am. At first, the plant produced mainly pasta products, but the scope of activities has broadened over the years. The factory doubled in size in 1997, and three production lines were installed for baked goods such as crackers, biscuits, cookies and pretzels. Bamba is also produced in Yokne’am. The plant won awards from the Council for a Beautiful Israel for its attractive premises.

Many Yokne’am residents are employed at the place. Yokne’am Ilit has attracted many high-tech companies, among them Intel, Medtronic, Given Imaging, Naiot Venture Accelerator, Mellanox Technologies, Marvell, Soltam, Lumenis, as well as many others.

Posted by Eretz Yisroel in the Lens at 10:00 PM