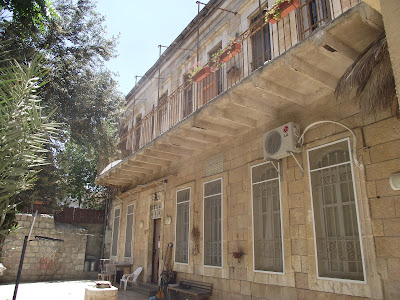 There are two streets in Jerusalem named in honor of Harav Isser Zalman Meltzer, zt”l. One is the shaded, jacaranda-lined street in the Ezras Torah neighborhood, called Rechov Even Ha’ezel, after the title of his commentary on the Rambam’s Mishneh Torah, a classic in the yeshivah world.

The other is Rechov Ha’erez, which are the initials of Rav Isser Zalman’s name. On this second little lane in the “Lev Ha’ir,” in one of the 32 (lev) Nachalot suburbs, the street sign says Rav Isser Zalman Meltzer was Rosh Yeshivah in Etz Chaim. The Rosh Yeshivah and his wife lived in the second building of this short street, on the second floor, right at the end of the balcony.

Rav Isser Zalman Meltzer was born in the city of Mir min the year 5630/1870, in what is today Belarus. His first teacher was Rav Yom Tov Hakohen Lipman, author of Malbushei Yom Tov. At the age of 13 he joined the Volozhin Yeshivah, where he was very close both to the Netziv and to Rav Chaim Soloveitchik.

In 5652/1892 he married the daughter of a talmid of Rav Yisrael Salanter, Reb Shraga Feivel Frank of the Alexot suburb of Kovno. During his engagement period Rav Isser Zalman contracted a grave illness. He informed his kallah that under the circumstances she could break the shidduch. His kallah in turn asked the Chofetz Chaim what to do. The Chofetz Chaim told her that long life and health are not necessarily synonymous. He said they should get married and wished them both arichas yamim. Indeed, his brachah came to fruition.

In 5654/1894, Rav Meltzer became a maggid shiur at the Slobodka Yeshivah, together with his brother-in-law, Rav Moshe Mordechai Epstein. In 5657/1897, Rav Meltzer moved to Slutsk to establish a yeshivah. When the Rav of the town (the Ridvaz) traveled to America to raise funds for the publication of his famous commentary on the Talmud Yerushalmi and to become Chief Rabbi of Chicago, Rav Isser Zalman was appointed Rav of the city. As he had no formal semichah, both Harav Chaim Soloveitchik and Rav Yechiel Michel Epstein, the author of Aruch Hashulchan, telegrammed semichos, effective immediately.

In 5683/1923 Rav Isser Zalman fled from Communist Russia with his yeshivah and his son-in-law, Harav Aharon Kotler. They moved to Kletzk, Poland.

When Rav Isser Zalman made aliyah in 5685/1924 he settled in Yerushalayim, in what is today called Rechov Ha’erez. He was appointed Rosh Yeshivah of the Etz Chaim Yeshivah. Rav Isser Zalman is credited with having introduced the derech of the Lithuanian yeshivos to Eretz Yisrael. He is considered “the Rosh Yeshivah to the Roshei Yeshivos.”

Rav Isser Zalman was niftar at the age of 83 on 10 Kislev (17 November) 5714/1953, and was interred on Har Hamenuchos. His brother-in-law, Rav Moshe Mordechai Epstein, the Rosh Yeshivah in Slobodka and later Chevron, shares the same yarhtzeit of 10 Kislev, although he was niftar 20 years earlier, in 5694/1933.

Much of the post-Holocaust yeshivah world in both America and Eretz Yisrael can be credited back to the influence of these two great geonim and tzaddikim.

Although Rav Isser Zalman was a talmid chacham of towering stature and therefore might be expected to have been somewhat aloof and severe, the opposite was the case. His warm and embracing nature shone forth.

His sympathetic heart brimmed with kindness and goodness to all and sundry, without exception.
Harav Elazar Menachem Shach said of him,“Rav Isser Zalman’s goodness knew no limit. He greeted every single person pleasantly, thus increasing people’s love of Hashem and heightening Heaven’s honor.” He further said, “Anyone who knew my uncle, Rav Isser Zalman, could no longer be a shlechter [bad-hearted].”

No one could match the exacting care Rav Isser Zalman took to avoid causing others distress. The two
following stories illustrate this point.

Each and every morning, Rav Isser Zalman used to daven in Batei Rand. He once decided to start davening at the neitz. He arose early the next day to implement his decision, but in the end did not attend the vasikin minyan, but went to the Rand shul as usual. He explained that he did not want to pressure the people at his regular minyan by making them feel he had upgraded himself whereas they were left behind just as they had always been.
Main source: “In Their Shadow” by Rabbi Shlomo Lorincz.

Posted by Eretz Yisroel in the Lens at 9:50 PM